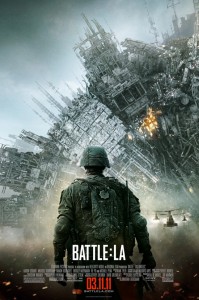 It’s been about a year and a half since a good alien movie has hit the big screen. 2009’s “District 9” was a huge success, and will probably go down as one of the best of it’s kind. Fast forward to March 2011, and “Battle Los Angeles” has hit the big screen. Luckily it was able to live up the hype, and stand toe to toe with it’s predecessors.

Marine Staff Sergeant Michael Nantz (Aaron Eckhart) is getting ready to retire after 20 years of active service to his country. After countless medals and serving overseas, Nantz says that he knows when to get out. Unfortunately, he doesn’t realize just how bad of timing his retirement is. Fortunately, for Los Angeles, he didn’t get to leave the base before they could call him back into duty.

Unidentified meteorite-like objects were identified in the solar system overnight, the likes of which would usually appear months in advance. As the objects get closer, the military realizes that the mysterious figures are actually mechanical, and that the US is under siege. Nantz is placed into a company of men commanded by 2nd Liutenant William Martinez (Ramon Rodriguez), including the brother of a soldier that was killed in battle under his command. Nantz is faced not only fighting the foreign enemy that threatens the country, but also with his own demons, as he tries to get his men out alive.

The great part about “Battle Los Angeles” is that once it gets moving, it doesn’t let up. The first fifteen or twenty minutes of the film is spent setting up the plot, and introducing us to the characters that we will be fighting alongside for the next couple of hours. But after that, things get intense and you are right there in the action. The camera work makes you feel like you are one of the marines, and things get extremely intense. The soldiers in the film know just about as much as you do about the enemy, so it’s pretty easy to relate with what they are going through.

For anyone who is interested in movies about war, “Battle Los Angeles” is a film you are going to want to see. Even with the Sci-Fi element, the film is comprised with a lot of tactics and military warfare. That is one of the things that really made it enjoyable for me. Most alien invasion films center around a main character who is a civilian that miraculously saves the entire world from it’s demise. Not this film. Instead of seeing the entire military fall around the main character who narrowly escapes death left and right, we are right there and the front lines with a soldier and his men. Aaron Eckhard does a great job in the lead, portraying a character that is much different than we’ve seen him play before. If you ever doubted his acting chops, I would say this movie would make you a believer.

The film looks great. Everything from the cinematography, to the special effects, was great. It was hard to imagine how they would pull off the destruction of Los Angeles, and the alien attack that would cause it. Sure, we’ve seen buildings blown up and city blocks demolished. But nothing like you see in this movie. The amount of pure destruction, and how real it looks is eerie. And the best part about it is how it doesn’t stand out like a soar thumb. Special effects keep getting better and better, and ‘Battle LA’ spares no expense in this department. Most of the invasion and aliens were computer generated – but you wouldn’t know it for the most part.

If you are looking for the first great action movie of the year, look no further. If you are a fan of military films and war, you have your movie. And if you just love to see what the world would look like if aliens took over, and the US Marine Corps. had to kick some ass – you better get to the theater. “Battle Los Angeles” is an intense film that will keeps the audience on the edge of their seats for the entire ride. With great special effects, sound and larger than life visuals, this is one you want to see on the big screen.

“Battle Los Angeles” is a B+