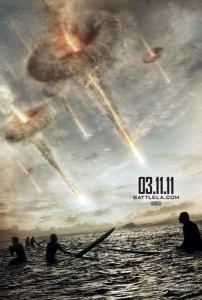 Well, after seeing the abomination that was Red Riding Hood, my editor promised to make it up to me by letting me see Battle: Los Angeles. He delivered, and I’m happy to say that I was at least entertained by this movie, if not particularly moved.

I’d been looking forward to seeing Battle: LA ever since I saw the previews for it. Based somewhat loosely on an actual event (during World War II, American coastal artillery began firing into the night sky in February 1942 after someone apparently thought America was being invaded), it strays a little bit from reality by incorporating an alien invasion.

The film starts by showing the development of the alien invasion. Staff Sergeant Nantz (Aaron Eckhart) is getting ready to hang it up after a twenty-year career in the Marine Corps. He’s served several tours of duty and is especially uneasy about his last tour, which resulted in the death of his squadmates. Now an instructor, he’s leading his final class through drills when the invasion first begins in the form of meteors striking near the beach.

Needing manpower, his superior officer assigns him to a platoon, some of whom are cognizant of his past. His new commanding officer, Lieutenant Martinez (Ramon Rodriguez), is fresh out of officer training school and tries to assert his authority, which Nantz agrees to follow. Their squad is assigned to escort some stranded civilians out of hostile territory to be evacuated before the military bombs the area, but Martinez promptly leads them into an ambush. Nantz, displaying the poise of a veteran, helps lead the team out of the hot zone and they begin to make their way first to the civilians, then to the forward operating base (FOB) where they are to be evacuated.

Along the way, they are attacked several more times and run into a small group of Marines, accompanied by Technical Sergeant Santos (Michelle Rodriguez), who provides valuable insight to the overall plan of the military, which was to find the command post of the alien invasion. They discover that the aliens are after our planet’s most abundant resource, stupidity water.

The film succeeds at the visceral level. The visuals and sound effects are outstanding. If you have trouble with motion sickness during films, you might want to avoid the movie. It felt like director Jonathon Liebesman did a good job of putting the viewer directly in the middle of the firefights. The tactics employed by the Marines appeared believable and not completely outlandish. The actors trained for several weeks with the USMC, and Eckhart in particular trained extensively with the Marine Corps to ensure at least a little bit of authenticity.

The acting for the most part is acceptable. Tension between the squad and Nantz builds due to the squad’s initial mistrust of Nantz, and the interaction between the group and the civilians they’re assigned to rescue has some shining moments. For the most part, however, the acting is pretty typical fare. There are some reasonably well-known actors in addition to Eckhart and Rodriguez, such as Bridget Moynahan and Michael Pena, but they don’t really add a lot to the film.

One issue I had was with the action itself. Perhaps I’ve just come to expect a certain amount of attrition from action films, but other than a couple of scenes, the Marines emerge from battles relatively (note, relatively) unscathed. As advanced as the aliens are, they appear to be firing high-powered kinetic weapons, which body armor seems to be able to stop relatively well. The squad remains surprisingly intact, given the amount of combat they face. Explosions simply knock the soldiers over rather than tear them to shreds.

A few other similar gripes. One, the squad seems to be carrying a nearly-unlimited supply of ammunition. Except for a couple of Marines, the majority of troops are carrying M-4 carbines, which have 30-round magazines. Yet the Marines never seem to run out of ammo. Sure, they replenish a bit when they get to the FOB, but after undergoing basically a day-long battle, they would probably run out of ammo long before reaching the base. Also, as a student of physics, I can’t help but note when a movie displays poor physics. Soldiers and Marines firing assault rifles and machine guns must deal with a heavy amount of recoil, but this never seems to be an issue. Finally, it doesn’t matter if you hide behind refuge, but if a ginormous spacecraft explodes and crashes near you, the impact will be devastating; to these Marines, however, it’s merely a nuisance.

Still, the movie succeeds where it wants to: it entertains. Except for a few moments of levity, the audience was silent throughout the film, as if absorbed in the proceedings. Battle: LA makes for a greatly entertaining action movie, even if the characters and story won’t necessarily leave a lasting impression on you. Go into it with realistic expectations and you won’t be disappointed.

Battle: Los Angeles gets a B-.