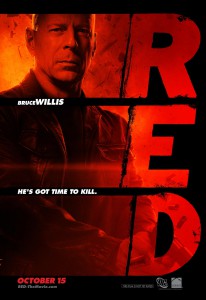 Bruce Willis plays retired CIA operative Frank Moses in the new action/comedy Red. He is on the run when a non-retired CIA covert team attempts to assassinate him. His solution is to reassemble his old team of aging veterans to figure out why. Like The Expendables the cast consists primarily of *ahem* “mature” movie stars though this time out the co-stars are more associated with art-house than adrenaline. Morgan Freeman, John Malkovich, Helen Mirren, Richard Dreyfuss and even Ernest Borgnine get to ham it up in this tongue-in-cheek adventure.

The plot, if that really matters in a film like this, is fairly convoluted. Something about Guatemala, a mission gone bad and list of names of people who keep turning up dead. But does any of that really matters when you have Helen firing a machine larger than she is? Allow me to answer on your behalf. No. It does not. In fact the film works best when it ignores it’s story and just allows us to enjoy familiar faces playing gloriously against type.

Of course, Bruce Willis as a CIA bad-ass isn’t exactly what you would call “against type”. He’s there to add just a dash of credibility to the affair and does so admirably. His performance is understated allowing his compatriots to play dress-up in way most of them never have before. Malkovich is particularly entertaining as a drug-addled former agent whose paranoid delusions aren’t always quite as delusional as you might initially imagine.

Unfortunately, the movie never quite provides enough action to truly work as an action film nor is it ever quite funny enough to truly work as a comedy. Make no mistake, there are parts of the film that work wonderfully. The film is buoyed by the performances of its cast. Of course, given the Oscar caliber of the ensemble I suppose that’s to be expected. But director Robert Schwentke never really figures out the pacing on the film and gets bogged down in a conspiracy theory that even the characters don’t seem all that interested in. Instead what we get is a movie that’s enjoyable in fits and starts. A pleasurable diversion but it’s never quite as a charming as it thinks it is.