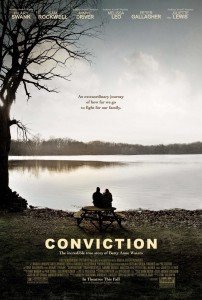 Based on the true story of Betty Anne Waters and her brother Kenny, “Conviction” tells us just one story out of thousands that belong to innocent people who have been convicted of crimes they didn’t commit.

Betty Anne (Hillary Swank) and Kenny (Sam Rockwell) are two people who grew up in a less than perfect situation. Raised between two unfit parents, several foster families, and their grandparents – the two of them turned out fairly alright given their circumstances. Although he has gotten into trouble with the law over the years, Kenny is a good person – and him and Betty Anne have stayed extremely close throughout their entire lives. One day Kenny is arrested for a murder of a woman who he already had an encounter with when he was younger. He plays it off as though the accusation is outrageous, and is eventually free to go home. But years later the crime comes back to haunt him. Wrongfully accused and imprisoned for life, Kenny is left without hope. Meanwhile, Betty Anne knows that her brother could never have committed the crime he was accused of, and decides that she will stop at nothing to prove his innocence. Incredibly, that leads her to abandon much of her life and most of the people she cares about, and study day and night to become a lawyer.

What is incredibly intriguing about the story is that it really happened, which makes it even more interesting than the premise already is. The fact that a person would completely drop everything to help someone they care about more than anything, is an amazing feat. Both Hillary Swank and Sam Rockwell pull off great performances, that suck you right into the film and what their characters are going through. The movie spans over the course of several decades, and the aging of the characters is very believable. At times the pacing feels a bit slow, but it is often hard to take your eyes off the screen – knowing what both Betty Anne and Kenny are going through. The film makes it hard not to care about both of these people, and everything that they lost. Meanwhile, you are on the edge of your seat as you wait for something to happen to put an end to the dis-justice they have endured.

“Conviction” tells an incredible story of an incredible woman, who makes a sacrifice that most people could never stand to make. She gives up some of the most important things in her life to save the life of another person who means more to her than anyone or anything. It is truly eye opening to watch something like this, and know that the story is far too similar to what has happened to thousands of people in the world. The film is worth seeing for the performances alone, and as a wake-up all if nothing else.

“Conviction” is a B-