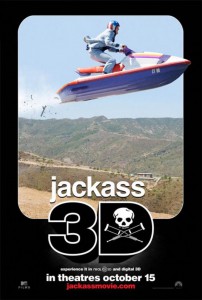 Warning: if you expect this movie to contain anything other than dangerous stunts, half naked to fully nude men, extremely ridiculous and irrational behavior, and extremely entertaining situations – your expectations are wrong. We have come to know what “Jackass” is for more than a decade now, and this movie is no exception. With that being said, let me introduce you to the funniest and most creative Jackass movie ever.

We were introduced to Johnny Knoxville and the “Jackass” crew back in 2000, when the guys got their own TV show. Since then, there have been many imitators, but none that have achieved the level of success that they have. “Jackass: the Movie” was released in 2002, followed by “Jackass Number Two” in 2006. Four years later, the guys are back and better than ever in “Jackass 3D.” You may be thinking, “is the 3D really worth it, or is it just a gimmick to sell tickets?” Well the answer is – the 3D is great. It’s definitely an original concept, and takes you right into the stunt (sans pain). The effects that just downright look the most impressive are when liquids are flying at the cameras and actors, and when the guys are flying through the air. The 3D cameras really give you a great depth of field. 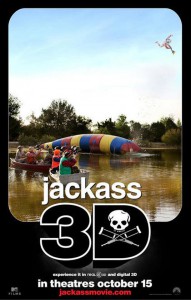 All of the stunts in the film are pretty entertaining. I think one of the things that makes this film so successful is that they chose the best of the best to make the final cut. Fast-forwarding to the credits, almost the entire time we see clips from new stunts that didn’t make the finished product. So you know that they filmed a ton of new material, and were very selective when choosing what would be in “Jackass 3D.” The film starts off with “the High Five,” a giant spring-loaded hand that aims for the doorway that half of the cast walk through at one time or another. Combine that with bags of flour and oblivious targets carrying trays of soup, and you have a classic “Jackass” moment. Much like that one, the rest of the film is comprised of a myriad of outrageous pranks and stunts from way out in left field.

Visually, the title scene and ending segment of the film were amongst the most impressive. Fully utilizing the 3D technology to the fullest extent, the beginning and ending of “Jackass 3D” are packed with slow motion, incredibly high definition shots of confetti, water, explosions and more. It really is a testament of what the technology can do, and how it can be used to see the depth of it’s target. Of course, this may be one of the sillier uses of the new camera technology, but hey – why not use it for something this fun? 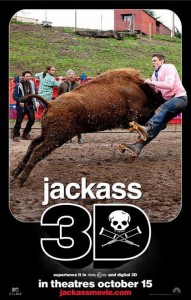 From beginning to end, there truly is never a dull moment. The entire “Jackass” crew is back and better than ever, and they prove that they haven’t lost their touch over the past decade. The movie is what it is, and if you are expecting it to be anything else than just plain fun – it isn’t the movie for you.