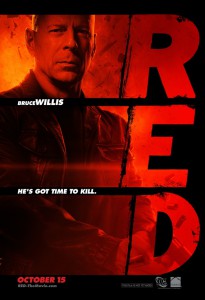 This year has effectively answered, what should aging action stars do? Well, if Red is any indication, embrace the age and make solid action comedy out of it.

Based on the Warren Ellis DC Comics graphic novel of the same name, Red stars Bruce Willis as a “RED” or as Ernest Borgnine’s character Henry tells us, “Retired, extremely dangerous”, by the name of Frank Moses. Moses now lives a lonely life in Cleveland, Ohio, growing avocados, in which is only bright spots are the times when he receives his pension check, and promptly tears it up to ensure a talk with Sarah Ross (Mary-Louise Parker. Things get a bit complicated when someone sends a hit squad against Frank, which sets in motion a series of events which brings back old colleagues, and enables the kidnapping of his crush, Sarah, to ensure her safety.

If any of this sounds a bit far fetched, don’t worry it is. Rather than try to hide it, the film embraces a bit of its over the top lunacy, and milks it for some very effective humor.  The film is riddled with spy film cliches, but adds a bit of a twist with the retirees who live out the action, rather than the normal strapping spies as usually portrayed by the younger actors like Matt Damon and Angelina Jolie.

What really sells the film is its exceptional cast which includes veteran actors Morgan Freeman, John Malkovich, Helen Mirren, Richard Dreyfuss, and Brian Cox.  Every single one of them plays their roles perfectly. I was pleasantly surprised with the ease Mirren played an action hero. It made me wish she had pursued the type of role more often in her prime. (Although, it is hard not to admire how beautifully she aged.) John Malkovich easily plays the wackiest character in the film, but pulls it off with flying colors. The role seems tailor made to Malkovich’s unique eccentricities. Morgan Freeman isn’t given a lot to do in the film, but what he does, he does admirably. I doubt anyone has ever disliked Freeman in a role where he plays one of the good guys.

Bruce Willis proves that he is still a competent male action lead, and can still battle with an up and comer like Karl Urban (Star Trek‘s Bones). Willis actually seems much more ageless than many of his 80s action hero counterparts. I would almost argue that Willis is almost more intimidating as an action star today than he was twenty years ago. His calm demeanor has a slight edge that gives him an air of believability around his role.  Willis has possibly some of his best chemistry on screen as of late with Weeds star Mary-Louise Parker, who seemingly delights in getting out of the housewife role for once.

Director Robert Schwentke takes a drastic turn from last year’s The Time Traveler’s Wife, and it seems the change really suits him. The lighthearted feel of the Red has more heart than Schwentke’s sci-fi romantic tear jerker. Although, Schwentke does guide in a few mistakes, including a bland visual style, and some slightly jarring scene changings.

What really makes the film is the incredibly talented cast, and easily accesible humor. This is an action comedy that all ages can enjoy. There is a fantastic mixture of comedy and action, which makes this one of the more successful films of the year.