I’m not sure whether to be amused or unsettled by the fact that the vendors in the Beer Garden of T.R. Hughes now recognize my friends and I on the spot.

After the entertaining double-header and dollar beer last week, it took little convincing for me to get Jackie and Elizabeth to come to the game with me against Oakland County this week. Apparently they had so much fun they managed to convince others to join us. Armed with cash, the three of us, along with Tara, Megan, Joe, and Amber headed west to the ol’ ballpark.

We found a nice little perch in right field and settled into our seats. There was a noticeably larger crowd this week. Unfortunately, the Rascals hit a little bump in the road last night. Starting pitcher Tony Marsala, who threw seven innings of shutout ball his last start, got roughed up for seven earned runs in 2.2 innings. Relievers Eric Berkowitz, Nick Phillips, and Keli’i Zablan did their best to staunch the bleeding, combining for 6.1 innings of one-run ball, but the offense never really got going and the Rascals dropped the game 8-1. 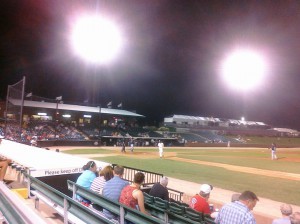 I don't really remember what inning this was taken, or what's going on in the game. Did I mention the dollar beers?

Most of the Rascals seemed to struggle at the plate and on the field. Doug Sanders did have two hits and drove in the lone run for the Rascals after Caleb Curry (who also had two hits) singled and advanced to third on a wild pitch. But the Rascals managed just five hits against the Cruisers’ pitching staff. Even the mighty Stephen Holdren, whose picture is in the dictionary next to the entry for “manly men manlier than you,” had an 0-fer and made an error in the field.

On the mound, Marsala never seemed to look comfortable on the mound. He didn’t surrender an extra base hit, but he did give up seven hits and hit a batter. Zablan was one of the few bright spots, pitching three innings and surrendering just one unearned run in his Rascals debut.

With roughly two and a half weeks left in the season, the Rascals find themselves 9.5 games out of first, but in second by 3.5. Since the top two teams from each division advance, they simply need to avoid a collapse and they’ll make another post-season run.

Despite the loss, the game was still enjoyable. The weather was a bit warm, but as the sun set, the temperatures dropped to an Arctic-like mid-80’s. By the fourth or fifth inning, I’d even managed to drown out the sound of the horn. As it was the first Rascals game for many of my friends, we managed to have a good time, and Amber and I even managed to sneak away and get another epic snowcone. Blue raspberry should be made our national snowcone flavor. Amber seemed to enjoy the snowcone as well, but she didn’t appreciate me ambushing her with a picture. 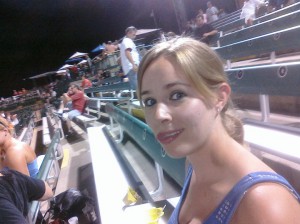 Liz: Steve, buy me a lightsaber!

What can I say, I’m a man with priorities.