One of my favorite things about sports in general is the history of the games. The undeniable legends who stood taller than everyone else, the greatest plays in history, the indelible moments that come to define legacies.

Like any institution, often these sports attempt to embrace their past, encouraging people and the participants of their sports to learn the history of the game. The name Jackie Robinson may not exactly be a household name, but you would likely be able to find a large portion of the population who is at least familiar with the name. MLB embraces Robinson’s contributions and has an annual Jackie Robinson Day on April 15, during which all MLB players wear the number 42, the number Jackie wore when he broke the color barrier. Some fans like it, some find it annoying. Whether or not you enjoy it, it’s hard to deny that MLB has gotten their point across.

Other sports, though, haven’t been nearly as quick to embrace this movement, even when desegregation occurred before MLB. The NFL is the biggest professional sports league in America by revenue, but if I were to ask you to name the players who first broke the color barrier, chances are unless you’re a pupil of the game, you wouldn’t be able to offer them. 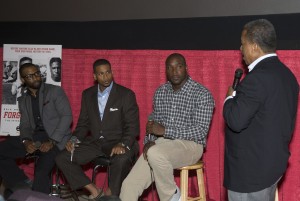 Cue the airing of The Forgotten Four September 23 at 8:00pm ET on Epix. With this hour-long documentary, executive producer Ross Greenburg (formerly of HBO Sports) hopes to bring to the light more attention to the four men who permanently desegregated professional football in 1946: Kenny Washington and Woody Strode, who played for the Los Angeles Rams of the NFL, and Bill Willis and Marion Motley, who played for the upstart Cleveland Browns of the All-America Football Conference.

I was fortunate enough to attend a screening of the documentary hosted in part by the St. Louis Rams. On-hand for the screening and for an engaging Q&A session following were Rams alumni Derek Stanley, Brandon Williams, and Will Witherspoon along with St. Louis Post-Dispatch columnist Bryan Burwell.

The documentary itself is entertaining and engaging. Producers sought out the progeny of the four men, who have all passed away in the time between desegregation and filming. While all four men faced discrimination, Motley and Willis became indispensable stars on the Browns, as they were vital cogs for a team that won four straight AAFC championships before moving to the NFL and winning that championship in 1950, their first year in the league. Both men were voted to Pro Bowls and were eventually inducted into the Pro Football Hall of Fame.