After finishing last season 7-9, 2011 was seen as a measure of optimism, perhaps a turnaround season that could get the Rams back into the playoffs, or at the least at the brink of respectability. Many pundits predicted the Rams to win a weak NFC West. Unfortunately, this never really panned out. A much tougher schedule combined with a plethora of injuries to key players sank the season almost as soon as it began, and the Rams finished the season 2-14. 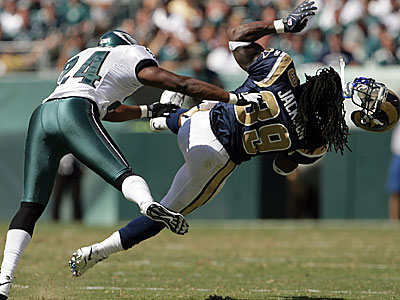 As a Rams fan (yes, I’ll admit it, I watch the Rams), I tried to approach each week with a sense of (irrational?) optimism. Even after starting the season off 0-6, they somehow managed to upset the New Orleans Saints 31-21. After that, though, other than a 13-12 win at Cleveland, it was pretty much a grab bag full of desolation and shattered dreams, much like my love life.

Spagnuolo finished his tenure as head coach with a 10-38 record. Having never met the man, word is he’s a generally likable guy, respected by his players. The greatest evidence of this can be found in the effort put forth by the team each week. Even yesterday, when a loss (coupled with a Colts loss) would have provided them greater leverage in the upcoming draft, the Rams went down fighting, losing to the San Francisco 49ers (who clinched the second seed in the NFC) by one touchdown.

In the end, however, the NFL is a results-driven league, and simply put, he didn’t get results. He also ruffled feathers to a minor extent earlier this season when he removed pictures and memorabilia around Rams Park that pertained to the Greatest Show on Turf. Some people called for him to get another chance next season, given the rash of injuries, the lack of a training camp this season, etc. The problem with this, however, is that EVERY team faces injury problems and had to deal with a lack of a training camp.

Had Spags been the manager of the Cardinals and had a .208 winning percentage, that’d amount to a 34-128 record. Now imagine him removing pictures and memorabilia around Busch Stadium that pertained to Ozzie Smith, Stan Musial, Bob Gibson, and other icons who won World Series.

How long would you see him staying manager? Exactly.

I’m simplifying this, of course, but in layman’s terms, the Rams weren’t winning. As for Devaney, the drafts of the last few years were extraordinarily hit-or-miss. Although the Rams have drafted some good talent in the last few years, such as James Laurinaitis and Sam Bradford [more on him in a minute], many of their players have been too injured to determine their future (Bradley Fletcher, Jason Smith, Rodger Saffold), while some have just been flat out busts (hello, Mardy Gilyard).

So now, where do the Rams go from here?

Obviously, the first step will be to look for a head coach. Rumors flew last week about Jon Gruden, but were quickly squashed. Bill Cowher and Tony Dungy have both expressed a desire to remain in their current position as tv analysts. The Rams plan to speak with former Tennessee Titans coach Jeff Fisher this week. Fisher, who coached against the Rams in Super Bowl XXXIV, will most likely be in high demand around the league, as several other teams such as the Dolphins, Chargers, and Bucs will all most likely be pursuing new head coaches.

At this point, perhaps you’re a bit pessimistic about the future of the Rams. On top of that, whispers are going stronger that Stan Kroenke, the Rams’ owner, may decided to re-locate the team in 2014 after the lease at the Edward Jones Dome is up.

So, basically, things look like they suck for the Rams, eh?

Well…they do. But, things may not be as bad as some are making it out to be.

Just…stop laughing and hear me out.

– The Rams still have Sam Bradford. After a solid rookie season, he certainly regressed this year. Adjusting to Josh McDaniels’ offensive system, he never got fully in sync with the offense, and other than the game at Green Bay where he threw for 328 yards, he never really seemed comfortable. 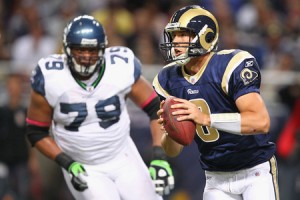 Sam bracing to throw, a defender rushing his blind side...yeah. That never happened this season, right?

Many people are ready to dismiss him already, citing various problems. He isn’t perfect, certainly. He would, however, benefit from a healthy receiving corps (losing your best receiver, Danny Amendola, at the outset of the season certainly didn’t help) and a consistent offensive line.

Even with this year’s struggles, he still has the potential to improve. Compare the first two years of these quarterbacks. I’m only counting the first two seasons they were full-time starters.

Quarterback A, through 26 games played:

Quarterback B, through 27 games played:

Now, I’m not going to sit here and predict that Bradford will have anywhere near the success Brees has had. I’m simply suggesting that perhaps a bit of patience is needed before people write off Bradford as a bust and get rid of him. Brees benefited by placement into a system with the scheme and personnel that best suited his strengths. It’s not a simple transition, but there’s no reason to assume Bradford’s incapable of overcoming one bad year.

What of his contract, you say? Didn’t he just sign some outlandish contract to play for the Rams? He did, and he received some substantial bonuses this year and last year for it. With those out of the way, however, his base salary and signing bonus for the next four years are pretty manageable; the final season of his contract, he’ll be due $7.405 million, not an unreasonable amount for a starting quarterback. There are incentive bonuses, certainly, but I think if he manages to reach them, we’d all agree they’re worth the money.

– The Rams also hold the number two overall draft pick in April. While the Colts will most likely hold the most leverage (should they decide not to draft Andrew Luck), the Rams could potentially trade the pick to another team in dire need of a franchise quarterback. With Matt Barkley heading back to USC for one more season, the list of top quarterbacks in the draft are scant, but Heisman winner Robert Griffin III is likely to command some attention. The Rams could possibly leverage the draft into several top-round draft picks, which they could use to re-build their offensive line or draft a playmaker, perhaps a wide receiver (Justin Blackmon and Alshon Jeffery are likely to be the two names floated at the top). Should Brandon Lloyd follow through with his idea to follow offensive coordinator Josh McDaniels wherever he goes (McD has one year left on his contract, but with the ousting of Spags combined with the woefully inefficient offense, it’s no guarantee he’ll stick around), the Rams will be in need of someone for Bradford to throw the ball to, even when Amendola returns.

– The Rams will also have a large amount of salary cap space to try to lure impact free agents to St. Louis. Should they be unable to procure their future via the draft, they might be able to do it through free agency. There are, admittedly, several areas that the Rams need help in: offensive line, running back (to back up Steven Jackson), wide receiver, tight end, defensive tackle, outside linebacker, cornerback…it’s a pretty extensive list.

– Steven Jackson might be my favorite St. Louis athlete now that Albert Pujols has defected to the Angels. An absolute pro, Jackson has toiled year in and year out for a team that’s given him few dividends in return. Against the Steelers this year, Jackson became just the seventh running back in history to have seven consecutive seasons with 1,000 yards rushing. Steven also surpassed Eric Dickerson for the most yards rushing in Rams history. Jackson missed one game due to injury and had just six rushes combined in two other games, but he still finished with 1,145 yards on 260 carries and five touchdowns. Although he is approaching the age at which running backs begin to wear down, Jackson is still going strong. He’s declared his desire to play his entire career in St. Louis; unlike other athletes who’ve said the same thing (ahem), he seems legitimately interested in following through.

– The Rams struggled with the run defense this year, allowing 151.7 yards per game (31st in the league), but this was inflated by three absolutely terrible games in which they allowed 236, 294, and 268 yards. Removing those from the mix, and the Rams allowed a much more respectable 125.3 yards per game. The Rams also actually ranked statistically in the top ten in passing defense, allowing 206.7 yards per game through the air. St. Louis has the potential to have one of the best pass rushes in the game, with Chris Long (13 sacks) and Robert Quinn (five sacks) looking to anchor the pass rush in the immediate future. 34-year old James Hall, who led the team with ten sacks last year, contributed six sacks this year.

– The Rams also have a monster middle linebacker in James Laurinaitis. I’m still not sure how he managed to slip to the second round. In three years, Laurinaitis has become the captain of the Rams defense (even if he isn’t officially). He’s not flashy or overly fast, but he’s a solid tackle, and he knows how to play. He, Long, and Quinn, could lead this defense for a long time.

Wow…1600 words already. This is far from an authoritative entry on what all went wrong this year. Any thoughts you might have are welcome at the bottom.

Ok, I know. They still finished 2-14. Chances are they’re at least two full years away from competing, if they can have some monster drafts and free agency acquisitions. It’ll be an interesting off-season, though. And who knows? Stranger things have happened than a one-year turnaround.