Queen Elizabeth II Gives “The King’s Speech” a Thumbs Up 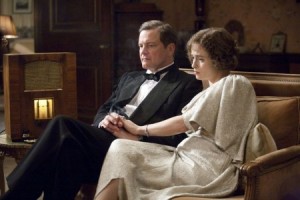 Talk about pressure. Many people have screened biopics next to the people they were based on, but none of them were one of the most recognizable figures in the world. Her Royal Highness Queen Elizabeth II got a private screening of Tom Hooper’s The King’s Speech, which is based upon her father, King George, and his problems with speech.

An insider from the British newspaper/tabloid The Sun said that the Queen found the film, “moving and enjoyable” and “was clearly amused by some of the lighter moments.” She was also said to be “touched” by Colin Firth’s portrayal of her father.

The film is on quite a roll lately, having recently picked up 12 nominations for the 2011 Academy Awards, the most of any picture in contention this year. Currently, Colin Firth is the favorite to win Best Actor, and the film itself is the favorite for the top prize of Best Picture.