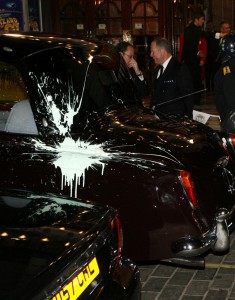 Civil unrest is growing in the world. Yesterday, a group in support of Wikileaks took down the websites of Visa, Mastercard, and Paypal. Today, there were displays of civil unrest in Britain after a controversial new piece of legislation that hike university tuition fees. Protesters threw whatever they could find at riot police today to let them know what they think of the new law.

Tonight one of the members of the British Royal Family and the next member in the line of succession for the monarchy, Prince Charles’ 1977 Rolls Royce Phantom IV was attacked by a protester.

Adnan Nazir recognized Prince Charles and wife, Camilla Parker Bowles, and pelted the car with paint. Protestors immediately starting hitting the car, and the final damage shows a large dent, and a couple of broken windows.

Both Prince Charles and his wife were unharmed in the acts of violence, and the Prince even gave a thumbs up to onlookers to let them know he was okay.

I understand why people are starting to protest and riot, with the world economy in dire straights, and costs rising for the lower and middle class, things are going to get rough. However, I don’t think attacking the monarchy is really going to do you any good, especially since the British monarchy is merely a figurehead, and have no say in lawmaking.