Part one covered the first two spots in the rotation for the Cardinals, which is a pretty potent ace combination. This isn’t a unique situation, though, as there are many teams around the league with a strong 1-2 combo. What sets the Cardinals apart from most teams (aside from teams such as the Phillies and Angels) is the depth in their rotation, which might be the most underrated components of the roster.

Garcia came out of the blue to nab the fifth spot in the rotation in 2010 and produced a phenomenal season (13-8, 2.70 ERA, 142 ERA+), good enough to finish third in the rookie of the year voting. When Wainwright went down last season, Garcia was expected to carry an even bigger load. He did so ably, but in the process also raised a few question marks. 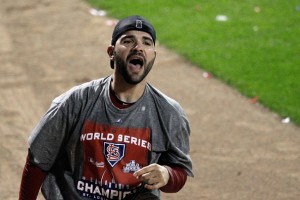 Perhaps unfairly, after his rookie season, Cardinals fans expected him to become a number 2 starter. Garcia’s still 25 and is developing as a professional. He started the season off incredibly strong: through May 22 he was 5-0 and had an ERA of 1.93. In his May 6 start against the Brewers, Garcia took a perfect game into the 8th inning and eventually pitched a two-hit complete game shutout. In his start against the Rockies on May 28, though, he got rocked for 11 earned runs in 3.1 innings, and his season was never the same. He struggled with his consistency, and he mixed in some incredibly good starts with some equally bad ones. He endured a particularly rough August, and in the playoffs, he again mixed some good starts (7 IP, 3 ER vs the Phillies in Game 3 of the NLDS, 7 IP, 0 ER vs the Rangers in Game 2 of the World Series) with some uneven ones (4 IP, 6 ER vs the Brewers in Game 1 of the NLCS).

So what was it? It could have been that rough game against Colorado got to his head; it’s hard to take a shelling like that and completely forget it. It could have been some of the numbers he posted in 2010 were a result of luck and superior fielding: although his ERA rose by .86, his Fielding-Independent ERA was lower in 2011.

Most likely the biggest factor was fatigue. After Garcia missed part of 2008 and most of 2009 due to Tommy John surgery, Garcia threw 163.1 innings in 2010 (previously, the most he’d thrown was 155 innings…in 2006). Typically, pitching coaches try to limit the increase in innings on a young arm to no more than 25 over the previous season, but Garcia blew past that in 2011: 194.2 in the regular season and another 25.2 in the playoffs.

Garcia has emerged as a legitimate above-average pitcher, and the return of Adam Wainwright should help alleviate some of the pressure on him. He signed an extension to his contract through 2015, with team options for 2016 and 2017, so he’ll be around a while. When his game is on, he’s on; he just has to improve the consistency of when he’s on. 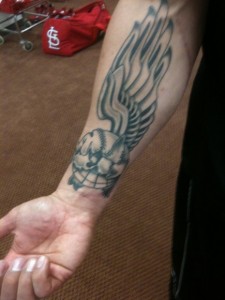 Either way, he's still got this awesome tattoo.

Lohse might be the Cardinals’ most underappreciated player. After two ineffective, injury-plagued seasons, Lohse was probably the Cardinals’ most effective starter last season, leading the starters in wins, ERA, ERA+ and WHIP, yet he hasn’t received much positive praise from people other than his teammates and coaches. Lohse pitches to contact, as he’s certainly not a power pitcher (his fastball averaged 89.4 MPH last year), and he tends to produce more ground balls than flyballs, although he’s certainly not a worm burner * like Jake Westbrook.

* – slang term for a pitcher who produces a lot of ground balls, thus perhaps killing the worms extant in the ground

Lohse is in the final year of his contract, and he was fully healthy last year and produced, unlike the first two years of his contract. He may not be as effective this year (his Batting Average for Balls in Play was an unusually low .269, a full 33 points below his career average), but if he stays healthy, he’s one of the better number four starters in the league. One interesting note about his career is that his best years tend to come every third year: 2002, 2005, 2008, and 2011 were all notable for being better than the rest of his career. Also, he’s the only member of the Cardinals’ starting rotation who hasn’t undergone Tommy John surgery.

If Shelby Miller’s the Cardinals’ top pitching prospect, Martinez is right on his heels. Martinez just turned 20, and yet scouts are touting him as the number two prospect in the Cardinals’ farm system. It’s a bit early to get super excited, but the comparisons have been made to Pedro Martinez.

Martinez absolutely dominated low A ball last year (2.33 ERA, 50 K in just 38.2 innings) and was promoted to high-A ball. His walk rate increased, perhaps due to increased plate discipline from the hitters, but still struck out more than a hitter an inning.

Martinez’s greatest weapon is his four-seam fastball, which he regularly throws in the mid-to-upper 90’s and flirts with triple digits. He’s also developing a change-up, a curveball, and slider. If he can master three of those pitches, he could reach St. Louis in a couple of years. He’s got plenty of time, so unless he makes some exponential strides this year, don’t expect him any sooner than 2014.