So now we get to the back end of the rotation. For a little while, it appeared as though Roy Oswalt would be coming to the Cardinals, but he elected to remain a free agent.

As it stands, the fifth and final spot belongs to Jake Westbrook. The Cardinals also have a couple of options at long relief should one of the starters get injured, and we’ll get to them in a bit. Oswalt does remain an option down the road, should a starter be lost for an extended period of time, but as it is, he’s no longer in the plan. 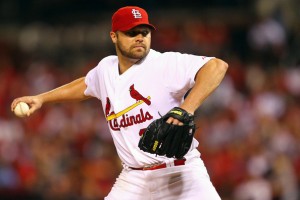 Let’s be honest, there weren’t a lot of people who really wanted Jake Westbrook to come back as the Cardinals fifth starter who didn’t have the last name Westbrook.

Westbrook was acquired in 2010 as part of the three-way trade that sent Ryan Ludwick to the Padres. Taking the spot of a fan favorite automatically starts you off on the wrong foot with your new team, but his performance the last half of that season was enough to win fans over and to convince management to sign Westbrook to a two-year, $16.5 million dollar contract with an option for 2013.

Westbrook is, through and through, a worm burner. He’s regularly among the league leaders in ground ball/fly ball ratio (last year he ranked second in the majors). He doesn’t throw a lot of heat, so he relies on a sinker that averages around 90 MPH. Because of this, he stands to gain more than just about any other Cardinals pitcher from the defensive upgrades at shortstop and second base. Last year, Westbrook was the least effective starter in the rotation, but that could change with a bit of luck this year: his batting average for balls in play was higher than his career average, and his fielding-independent ERA was 3/10 of a run lower than his actual ERA, an indication his defense hurt him ever slightly.

Westbrook was the odd man out in the rotation during the playoffs, but he still played an important role. Westbrook pitched in two games and threw two scoreless innings, including the crucial 11th inning of Game 6. Facing four batters, two of which included Nelson Cruz and Mike Napoli, Westbrook limited the Rangers to a single base hit, setting the stage for David Freese’s heroics.

Other than the season he missed due to Tommy John, Westbrook’s been a generally durable pitcher. He reported to camp this year having lost about 25 lbs. in an effort to increase his endurance and lighten the workload on his legs. I won’t be so bold as to predict a 20 win, sub-3.00 ERA season, but if Furcal can stay healthy and the Greene/Descalso combination can perform adequately at second base, it’s not unreasonable to expect 13-14 wins and a solid 180-200 innings from him. Coming from a fifth starter, you can’t ask for too much more. *

* – Yes, I know, at $8.5 million this season, he’s not exactly being paid like a fifth starter, but there’s not much you can do about it. I guess you could root for Westbrook to get hurt, but I’ll stop following sports before I wish injury upon a member of my hometown teams.

Now, should one of the starters go down, the two most likely emergency starters would be Lance Lynn or Kyle McClellan. McClellan held his own as a starter last season for most of the first half, but eventually he faltered, perhaps due in part to lack of stamina (formerly a starter in the minors, he pitched the first three years and the last half of 2011 in the bullpen). Lynn is also a career starter in the minors who found his niche in the majors in the bullpen. He started two games last year, and other than his first rough outing, he was pretty lights out: in his final 17 games, he went 1-0 with a 2.15 ERA and allowed a slashline of just .204/.281/.301 while striking out 35 batters in 29.1 innings. During the playoffs, he was pretty solid. In the NLCS and World Series, apart from Game 6 (when he gave up three earned runs in 1.2 innings), he gave up a total of one earned run in 9.1 innings.