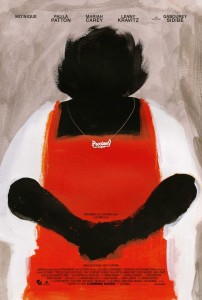 Precious has been lauded with praise since its debut at Sundance this year and considered a front runner for Best Picture for a while now, and while I don’t quite agree with that assessment the film is still a well made drama about overcoming your obstacles in life no matter how hard they come.

Precious is a sixteen year old girl pregnant with her second child, both fathered by her own father, living in an abusive home with her mother, and while intelligent lacks in her abilities to actually show her smarts.  It’s funny that this film goes pretty much nationwide in a limited release the same day as the similarly themed The Blind Side as they send the same message but told at almost completely different ends of the spectrum.  In The Blind Side, things are hard off for our main focus, but as he moves on and gets better, good things seem to happen, where as Precious takes one step forward and then something tries to knock her ten steps back.

The film piles it on and is relentless with obstacle after obstacle thrown at her.  Everything horrible that you could probably imagine happens to this poor girl, but she keeps moving forward in this ultimately tragic tale.  I won’t go into her hurdles as it is quite spoilery, but expect the worse.  That isn’t to say that there aren’t some lighter points in this film though, and while they might be few and far between, they offer some nice moments of levity to a film that is constantly pulling you down.  Almost every character gives you a moment where you can get behind them and there progress, but also will shake your head in sadness at something else about their lives that might be even out of their hands.  The only character in the film that is mostly unaffected and leading a normal life is Precious’ teacher Ms. Rain; unless you are a republican.

Lee Daniels directs the film in a very believable fashion, making the film feel authentic without giving into stereotypes or generalizing about race and social class.  I really liked what he did to shield us and Precious from some of the horrible news and events that happen to our young hero, though the scenes of Precious’ fantasy almost make the horrible act hurt more left to our imagination.  His decisions thematically are a bit weird as well, as the film feels a bit disjointed at times and I’m not sure how I feel about all the fade to blacks.  But he gets a hell of a lot of mileage out of his actors; many of which who are unknown.

The lead, Precious, is played by Gabourey Sidibe and she is quite remarkable in her first major acting role.  She can be kind and relatable, a badass enforcer in the classroom, a loving mother, or even a fire cracker ready to go off at any moment.  She shows quite a bit of range and really shines in her fantasies where she leads a glamorous life.  Besting her though is Mo’Nique as the evil mother, Mary, who hates Precious because Precious stole Mary’s boyfriend whom is also Precious’ father; really messed up stuff.  Mo’Nique lights up the screen with her fire and wickedness towards Precious and absolutely kills you in the films final scene as she explains her view of why she is the way she is towards Precious; tragic stuff.  Mariah Carey plays a welfare worker that won’t give Precious any more checks after learning her path and does a fine job in her small role showing confidence yet hides sorrow for this girl’s situation.  Paula Patton is also excellent as the alternative school teacher that helps Precious learn to read and write and is the driving force for hope in the picture not just for Precious but her classmates as well.  Patton captures hope inside her turn as Ms. Blue Rain and is an inspiring force.  Lenny Kravitz also deserves mention for bring a smile to our face in his two brief scenes as a nurse that befriends Precious and shows some good acting chops here.

In the end, Precious is an interesting character study about hope and breaking free that is tragic even with its happy-ish ending.  Grounded and feeling real due to a bevy of great performances, lead by possibly the finest supporting female role of the year from Mo’Nique, there is a lot to appreciate here and it is not nearly the downer of a film the trailer sells you on.  With that said though, it is no easy road, horrible things will happen repeatedly, almost to the extent it becomes too much to believe in.  Thankfully it never crosses that line and while the story might be quite sad and not quite as happy as the end would make it seem it is a story worth experiencing if you think you are up for it.

Precious is a B-