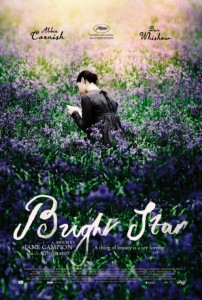 The new Jane Campion film is a period love story where the two lovers are destined to never be together and while it can be a bit slow and overly dramatic at times the three main actors are in top form and are worth the price of admission.

Following the love affair of Fanny Brawne and poet John Keats the two’s tragic tale is different and almost unbelievable in today’s day and age.  Fanny comes from a well to do family with Keats coming from a lesser background and carrying on as a poor and unsuccessful poet.  The two don’t hit it off from the get go with Fanny not even being a big fan of literature or his work either.  The two become acquainted when Keats moves in with the Brawne’s neighbor Mr. Brown as they work together and Brown helps Keats keep a roof over his head.  The two houses share a wall and are connected by a door in the foyer, so the two sides spend a lot of time together.  With Fanny being the Brawne’s of age daughter, they are looking for her to find a proper suitor, Keats’ lack of wealth is not what they are looking for and she finds herself being constantly advised against falling for him as they grow closer.

The film is interesting to watch as there are a few sub plots that play into the proceedings as well odd actions of the family to keep Fanny free of unwanted men.  Fanny is constantly followed by her younger brother and sisters, literally going everywhere she goes, and keeping Keats and Fanny from doing anything even as simple as holding hands.  There is also an engaging plot surrounding a competition of sorts among Fanny and Mr. Brown for the attention of Keats that provides a number of laughs from the film while also creating an interesting view of society at the time and the relationships among men and women.

In fact, Paul Schneider as Mr. Brown is the real stand out in the film, though he has been one of the best young actors for years now, turning in great work in everything he does.  I hope he gets to break out into more mainstream stuff sooner rather than later.  Abbie Cornish is also getting quite a bit of praise for her work as Fanny in the film, and while I think she goes a bit over the top with her pain and sadness at times, she is very likeable and charming throughout and she has a great chemistry with her co-star Ben Whishaw who plays Keats.  Whishaw is appropriately conflicted and a bit closed off as Keats, and when we see him break out of his shell with Fanny it is a nice surprise and touching.  In fact I wish the story was a bit more centered on Keats rather than Fanny as I think he was far more interesting a character and person in this tale.

The over acting and over emotions in the films aren’t my only concerns as the film is a tad pretentious especially when celebrating the mastery of Keats.  You can tell the filmmakers adore the writer, but it is a bit much at times and goes beyond being just a celebration of the man’s words.  Though the story remains oddly compelling even if you find yourself rolling your eyes at the long winded Keats readings and again I think this goes to the credit of the performances.

In the end, Bright Star is an actors showcase and tragic story.  While Fanny might go a little overboard with sadness the outcome of this story is rather sad.  Two people in love kept apart by the times they live in is an unfortunate tale but one we have seen before.  If they film would have focused a bit more on the life of Keats I think the film might have been a bit better, but with that said, the film is well made and, outside a couple minor complaints, works.  The three main leads are all great in their roles and are worth checking out on their own right.  Luckily there is an interesting and mostly engaging story to go along with these acting showcases, though I can’t help but feel that the film couldn’t have found a better film in this intriguing ground work.  The film is still worth your time though if a fan of period romance or real life tales.

Bright Star is a B-