A new feature of ReviewSTL is our Pop Culture Critic, Blake, will be discussing everything in pop culture and giving his opinion (whether you agree or not). 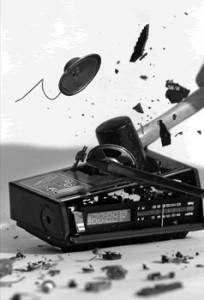 Driving to and from work is quite a task for me. I don’t have a huge commute, but it is far enough that it takes me at least a half an hour each way. This means I go through a considerable amount of mix CDs to keep my interest.  The problem is, I don’t have enough time to always make new ones and I get a bit tired of the same songs over and over again. So, what do I do when this happens? I turn to the radio, which makes me despair the future of music.

The first thing I notice as I go through the 10 programmed buttons on my Jeep’s dash is that at any given time, almost half of them will be programmed with ads. Which isn’t such a horrible thing, it’s what keeps these programs going, and allows us to hear music for free.

The second thing I notice is that radio these days suck. In metro St. Louis area, the radio we have to choose from is like most of the country, Clear Channel radio.  If not owned by the major radio conglomerate it still feels that way, with programming filled so tightly by what is considered hot by music executives that if can make anyone who isn’t a teen subject to absolute horror.

Case in point, as I was driving to work I decided to turn on the radio and as I went through the stations I heard Sara Barielles “Love Song” twice in a span of a couple minutes. This was at the very beginning of my drive, and I chalked it up to mere coincidence. That is until I pulled into where I park by my work, and as I am going through the stations, I hear it yet again. Now the amazing thing about this is the fact that this song was released over two years ago and enjoyed it’s biggest success, number one of the Billboard singles chart, over a year ago. Yet we are still being thrown this song ad nauseum. Don’t get me wrong, I’m not saying it’s a bad song. In fact, as far as pop chart toppers go, it’s fairly entertaining.

Upon hearing this for a third third time, I gave up and put back in one of my tired CDs. If I was going to listen to the same music over and over, it was going to be the music I chose. So continues the death of radio. People continue to use the airwaves less and less, as CD players became more prominent with their high fidelity sound, and now with the advent of MP3 players, radio is quickly going the way of traditional print.

It’s not that I don’t think people wouldn’t listen to radio, but why do that when you can click and choose your own playlist everyday. On the radio certain songs are kept in constant rotation and have an alloted amount that they must play every day. The airwaves are stagnant with the trash that is pushed down our throats daily. New artists aren’t discovered through a DJ playing their track on the radio anymore. Over produced, vocal encoded tracks dominate the airwaves that we the people once owned.

So, where did the downfall of the airwaves begin? Well, the easiest to spot is the Telecommunications Act of 1996 which was the first major act of its kind since the Telecommunications Act of 1934. The Act which did many things which had lasting effect, some for the better, some for the worse. What if for sure did was allow monopolies for companies such as Clear Channel and Infinity Broadcasting. You see, before the 1996 act companies such as this were not allowed to own more than two stations in a market and no more than 40 throughout the country. The aforementioned companies went on buying sprees and now own major portions of the market. Starting the downfall of a once powerful media outlet.

This act signed into law by President Bill Clinton may not seem huge when you look at it, but it has had a devastating effect on radio. The once creative medium had become a large corporate stream for music labels to push their newest stars upon us.

While it has worked to some degree for these companies and music labels. Music sales continue to drop worldwide as the internet has become the most major player in the music world. Pandora radio has millions of users creating their own stations to find new music. Other music services such as Blip.fm and Last.fm continue to take up the independent and creative medium that once was traditional radio.

Satellite radio has continued to falter, commercial free radio with a monthly fee started to take off, but with mobile jukeboxes such as iPods its audience continues to dwindle.  There are many things wrong with the Satellite radio service, people don’t want to pay for something they could already potentially get free, plus additional equipment is a turn off to many casual users. With GPS’s, radar detectors, and more clogging up our dashes, do we really want a satellite receiver on there as well?

So, dear readers, this is what I ask of you. Do you listen to the radio? Are you happy with the programming you receive in your city? Do you think that the airwaves should once again be regulated again to prevent monopolies and once again promote growth?

Probably a bit more serious than other posts will be in this series, but if you want a change. Write your representatives and tell them how you feel.