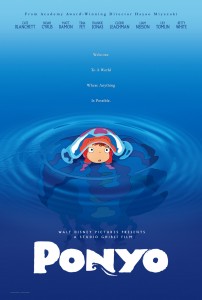 Hayao Miyazaki’s latest is given the A+ voice over treatment for American audiences with the help of John Lasseter and the results are a beautiful looking animated tale full of wonder and imagination that is a bit all over the place and can’t sustain it’s full run time.

Sosuke is a young boy that lives on the top of a hill of a port town. His mother works at retirement community and his father is a boat captain that docks in and out of their local port. Sosuke loves the water and one day when playing by his house he discovers a small red fish like creature with a rather human face. This fish he names Ponyo turns out to be on the run from an underwater sorcerer of sorts who begins to pursue Sosuke and his mother as the boy takes Ponyo down to school with him. Ponyo seems to be an unusual fish, as she can speak and apparently heal people, and Sosuke bonds with her immediately. When the sorcerer gets his hands on Ponyo again, Ponyo begins on the path back to Sosuke with the help of a little magic that will allow them to bond even further.

The film is a fantasy full of magic and wonder and when Miyazaki lets it all loose the film is jaw droppingly good. Unfortunately these grand and wonderful moments are few and far between and we are left with a cute and rather endearing film that works but we are left wanting more of those huge moments Miyazaki treats us to in the picture. One moment in particular is a tidal wave sequence that is just awe inspiring. Part chase scene, part powerful display of magic the scene thrills, makes you laugh, and puts you on the edge of your seat hoping for the outcome to work out for the best.

The story is a bit out there and rather eastern feeling in nature and the pacing leaves something to be desired. Inspired by the original story of A Little Mermaid, you easily can feel the references and I enjoyed the fresh spin on the subject matter, you are just wishing the magic on display was spread out over every once of the picture. Fleeting moments of wonder keep you interested and pull you back in from time to time, but outside the tidal wave sequence I never found myself just caught in awe and all that interested. The film felt like a series of moments that would have been much better served had there been less scenes of dilly dallying between Ponyo and Sosuke in between these great moments. Actually, the first half of the film is what really could have moved along better as the story doesn’t really get going till Ponyo’s return to Sosuke and there is a bit too much runtime dedicated to the simple notion that the two kids want to get back to each other. The ending is also pretty much a let down, not that it is not a desirable conclusion it is just so hammy and simple we almost feel cheated that there wasn’t more wonder in the conclusion for a film full of magic and fantasy.

Plotting and pacing aside, the animation is wonderful. As most Miyazaki films go the artistic work is a visual feast. Full of color and creative creatures the art style is just as imaginative as the plot can be at its best without the world getting as overtly weird as some Miyazaki productions have in the past. The fantastic visuals are almost enough to distract you from any dragging plot points and it’s nice to see some beautiful 2D animation once and a while nowadays; and I hope Lasseter succeeds and revitalizing that waning art form.

The voice cast is also full of A list actors, Matt Damon, Cate Blanchett, Tina Fey, Liam Nesson with the children being played by Disney’s next wave of child stars, Noah Cyrus and Frankie Jonas. Jonas actually does a pretty good job at carrying the film and Cyrus is delightful as the overzealous Ponyo though there wasn’t much to her character beyond yelling one word at a time.
In the end, Ponyo is a hit and miss affair that makes it worth watching for any animation fan due to Miyazaki’s wonderful imagination and visuals. The tidal wave sequence is worth the price of admission alone, but I don’t know if the oddness of the film will go over with American audiences. The kids in the screening I saw seemed to enjoy the picture though and the visuals are sure to arrest the little most of the time. Ponyo is incredibly cute and while showing signs of wonder and imagination at an A+ level, it never really sustains that caliber for more than a scene or two her and there. Still, something you can take the kids to that is smart and different should be an exciting prospect as is a much needed 2D foray for animation fans that have so little to quench their 2D thirst anymore. 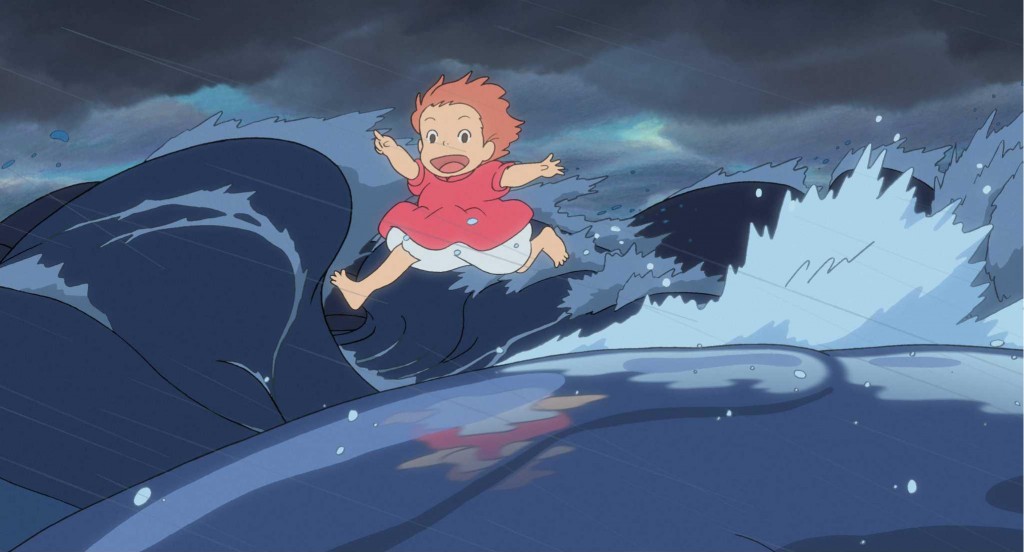