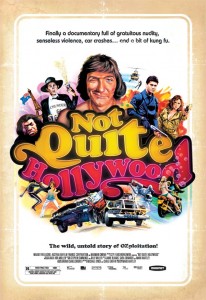 This documentary’s look at the genre film scene of Australia is a crazy and fun look into the world of over the top cinema and how it greatly helped Australia’s film community thrive and survive.

Now, first and foremost, if you are offended by cursing, gore, sex, male genitalia, female genitalia, ultra violence, and lots and lots of boobs, this movie is not for you. Full of clips and scenes from countless examples of the films in questions there is no shortage of the fore mentioned explicit content. Though, this film isn’t about that though, it is about the films that were about that content back in the day. A walk down memory lane into the boom of Aussie cinema can be thanked to these exploitation pictures that found success both in their native country and even in the U.S.

Full of interviewees from the dozens of films they get into it is actually quite impressive the number of people they were able to get on and talk about these films. And even better, no one is shy or bashful at all about the content or exposure they had in these films. The result is an honest and unfiltered examination of what these films meant to these people and the effect they had on the countries culture and film community in general.

In the early 70’s, most films made in Australia portrayed the country’s history or as a sort of exotic outback with kangaroos and kolas. The exploitation film boom allowed for filmmakers to not only make a number of interesting and outrageous films, but also show that Australia is not just wild animals and stuck in the olden times.

These films allowed showing the raunchy, sexual side of the country as well as putting on a brand of humor that was unique to the country. The success of these films allowed for more mainstream films to be produced and eventually opened the door for financing boosts to allow for a plethora of offerings in the weird, crazy, and wild side of production later on in the Aussie genre film golden age. These films turned out some international success such as Mad Max and some films lost to grind houses for Tarantino to enjoy and inspire him. Tarantino shows up repeatedly in the film, heralding these films and brings a lot of excitement and positive vibe to the genre.

Above all, the film gets you excited and wanting to see these films even if they are cracked out and over the top. The film gets you wrapped up in the fun of these films and really sells you on why you should seek out this genre of cinema however way you can. It may seem cheesy, ridiculous, over the top, or even absurd, but they are a lot of fun it seems if you sit back and enjoy the ride.
In the end, Not Quite Hollywood is an entertaining and informative documentary on a sub genre of films a lot of people don’t know about. Shocking and eye opening to what some films did back in the day; the film not only educates but successfully rationalizes the production of these exploitation films. Allowing for a bit of zany creativity and fun it these films delivered something that you couldn’t find in most films and let you try something different in your cinema taste from time to time. Best of all, the film inspires you to seek out some of these films and those like them, and I can’t imagine someone viewing this film doesn’t help grow the exposure of these “genre” films to their friends and film fans. If you can stomach it, it is a very nice little documentary that opens your eyes to a film world known by too few.

Not Quite Hollywood is a B