“Plan 9 From Outer Space” is being remade!? And it looks GOOD!? 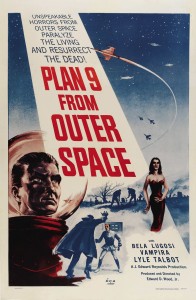 I am sure that I’m not alone in saying that I NEVER thought I would see a remake of Ed Wood’s “Plan 9 From Outer Space.” His movie from 1959 is about aliens, who resurrect the dead in order to destroy all of the humans. It is widely considered one of the worst science fiction movies of all time – so bad, that it is laughable by modern standards. Well guess what – it is being remade, and it actually looks pretty good!

Here are some clips from the original “Plan 9 From Outer Space,” for those of you who haven’t seen it or need a refresher –

Director John Johnson decided that he would make the movie that Ed Wood really wanted to make. The remake of the cult classic, simply titled “Plan 9,” is intended to be taken seriously this time around. And by the looks of the trailer, I am definitely willing to give it a chance. Johnson said, “Even if Eddie was a little off in his filmmaking skills, you cannot deny his passion. I feel a strong camaraderie for the man and his work, and hope that I can make a film that would be as loved by audiences today as the original was for his generation. Only this time with its true intention.” If there was one thing that Ed Wood loved to do, you could tell it was to make movies. His spirit will live on in “Plan 9” – watch the official trailer below!