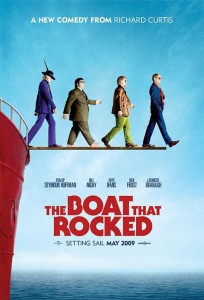 Formerly market as “The Boat That Rocks,” PIRATE RADIO looks like it is going to be a great movie. I can’t wait until it comes out, as it looks really funny and has a great cast – including Philip Seymour Hoffman and Bill Nighy.

Synopsis:
In the 1960s a group of 8 rogue DJs on a boat in the middle of the Northern Atlantic, played rock records and broke the law all for the love of music. The songs they played united and defined an entire generation and drove the British government crazy. By playing rock ‘n roll they were standing up against the British government who did everything in their power to shut them down.