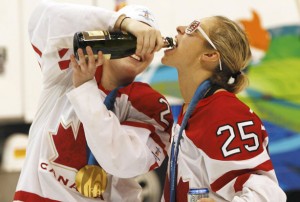 Most people are aware of the controversy surrounding Thursday night’s hockey game between the US and Canadian Women’s hockey teams. No, it wasn’t a bad call or an upset. This controversy took place after the game was over.

After defeating the US team 2-0, the Canadian women celebrated in full force. After the stadium had cleared, the press stuck around – snapping pictures of the celebration that included beer, champagne, cigars – and gold medals. By now, we are very aware of the International Olympic Committee’s strict policy on partying anywhere near an Olympic medal (if you haven’t read about Scotty Lago being kicked out of the Winter Olympics last week, click here). Of course the pictures were released of the ladies celebrating, and a beast was unleashed.

The International Olympic Committee stated in an interview with the associated press that they were going to investigate the celebration. Executive director of the Olympic games Gilbert Felli said, “It is not what we want to see. I don’t think it’s a good promotion of sport values. If they celebrate in the changing room, that’s one thing, but not in public… We will investigate what happened.”

What probably raised the most concerns with the IOC was that Marie-Philip Poulin, the 18-year-old star player who scored both goals in the game, was drinking underage. It’s not as bad as if it were in the US – in Vancouver, the legal drinking age is only 19. And furthermore, Poulin is only a few weeks shy of the legal age. but still, the law is the law, and I think that was a big part of the investigation talk. Other than that, celebration pictures featured Haley Irwin pouring champagne into Tessa Bonhomme’s mouth, players drinking beer and champagne while smoking cigars, and even Rebecca Johnston trying to drive the Zamboni around.

After all of the smoke cleared, it seems that the International Olympic Committee dropped it’s investigation for the most part. Saturday the IOC was whistling a different tune, as spokesperson Mark Adams said, “I would say to characterize it as an investigation would be wrong… We are just writing them a letter just to find out a few more details.”

He maintained that the scrutiny was coming not from the IOC but the media. That seemed partially correct. The IOC didn’t weigh in, apparently, until asked about it by the Associated Press. Still, an IOC official did use the words “investigate the actions” in the AP report Thursday night. He added, “I think if you read the statement from the athletes, they clearly knew they had gone out of bounds and they said it was inappropriate and they apologized for any embarrassment, so I think it’s pretty clear they know they overstepped the bounds.”

Below are pictures of the Canadian Women’s Hockey Team, Drinking and Smoking to celebrate their Olympic Gold Medal Win last night:

What do you think of the celebration? All fun and games, or bad representation of gold medal winning athletes? Leave your comments below.