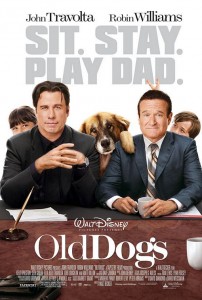 It isn’t very often I go see a film and can’t find a single redeeming quality about a film. I’ve seen some stinkers this year, but none of them top the sheer stupidity of Old Dogs.

When you first glance at Old Dogs you might think, “Oh, Robin Williams and John Travolta in a comedy film? Sign me up!”. Unfortunately, you’d be wrong. Both actors have had illustrious careers that got their start on TV, and have moved their way onto the silver screen. They are known for their comedy and dramatic roles alike. Even if you dislike the actors, you can’t deny the charisma they usually have on screen. The problem is that no amount of charisma can save a film that seems like it was scripted from the back of a Laffy Taffy wrapper.

Old Dogs tells the story of life long best friends, Dan and Charlie who co-own a sports advertising agency. Dan is the affable bachelor, and Charlie is the sad divorcee. They both have their spot in the relationship. We learn this in a business meeting where Charlie tells a story about taking Dan to Miami to get over his recent divorce 7 years ago. He woos the board of  a large Japanese company setting the stage for Dan’s business acumen, and setting the stage for our story. We are told the story of Dan’s second marriage which was annulled almost as soon as it started on the wild trip to Miami.

Flash forward to the deal almost closing, and Dan’s love shows up on his doorstep with the admission that he is the father of her two twins. She recently got busted in a protest, and must serve jail time for a couple weeks (apparently they lack decent lawyers in Vermont). Due to some unfortunate circumstances involving a hand model and the trunk of a car, Dan is left with the care of his new found children.

Dan is hopeless with children, and has a condo that forbids children. He turns to his best friend and spiritual brother, Charlie, to help take the load off. We are then treated to an hour of the most insipid and stupid slapstick to grace the screen in years.

Just how clearly can I define the idiocy of this movie? Well, there is one number that seems to do it. I counted 7 times someone was injured in the genital region. I’ve seen episodes of America’s Funniest Videos with less crotch shots. A guy getting hit in that region is about the cheapest form of laugh anyone can aim for. The comedy has been done many other times, and most of the time its success is determined by age. Having the same reaction 7 times in a movie just makes it that much more stupid. There is probably even a point where most children will forget what is so funny.

In addition to the overuse of sight gags, and general lack of creativity in the jokes, there is almost zero chemistry between any character in the film. Robin Williams and John Travolta are real life friends who have known each other for years, it would seem natural to put them in a buddy comedy together. Instead of brotherly love, there seems to be more homoerotic tension between the two. The children aren’t bad, but just aren’t given much to do. I have enough trouble watching misbehaved children when I am out, and I don’t really want to encounter it on screen. Although, the most ridiculous character in the film goes to Rita Wilson’s hand model character Jenna, whose cross eyed gaze and general lack of sense is more frustrating than funny.

I might not be the target audience for the film, but I’m not sure I’d take a child to it. There have been many more films aimed at children this year that were funny without pandering to them. There are so many highly regarded actors in this film (Kelly Preston, Matt Dillon, Seth Green,  Justin Long, etc.) that you have to wonder how much they were paid to be in this loser. This film easily gets my nomination for one of the worst films yet this year. A cliched and boring story filled with absolutely wretched humor adds up to disaster.