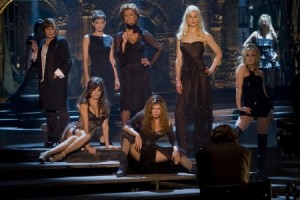 I think I might be a bit of a pessimist when it comes to film going audiences. Which is a bit weird, because I tend to be overly optimistic about many things in my life. It just seems that I can tell with the American movie going audience is going to latch onto something. I just don’t really see crowds gathering for Rob Marshall’s Nine. First, any time in my life that I have mentioned Federico Fellini’s 8 1/2 (which is more than you might think) I am treated to nothing but blank stares. Second, while most people know Chicago, and remember its nice little run at the Academy Awards a few years back, is it fresh enough in their memories to be a star at the box office?

While this film may not have a lot of recognition going for it outside of a certain type of audience, it does have a few other things. It has an actor who rarely takes a misstep, Daniel Day-Lewis, back in a role that women will find him attractive again. The guys have plenty of eye candy as well. It boasts one of the most impressive female casts of all time with, Penélope Cruz, Marion Cotillard, Nicole Kidman, Judi Dench, Sophia Loren, Kate Hudson, and Stacy Ferguson (aka Fergie). I’m thinking that this is going to be a very good film, but I’m not sure it will appeal to mass audiences at first. Although, with good word of mouth the film should have a long rung during winter.

Famous film director Guido Contini (Daniel Day-Lewis) grapples with epic crises in his personal and professional life. At the same time, he must strike a balance among the demands of the numerous women in his life, including his wife (Marion Cotillard), his mistress (Penélope Cruz), his confidant (Judi Dench) and others.