New ‘Texas Chainsaw Massacre’ Coming at You in 3D!? 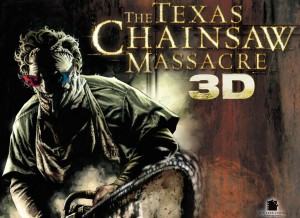 I have been a fan of most of the recent horror icon remakes. Halloween was different and completely Rob Zombie’s film. I enjoyed it for what it was which, for me, was raw and brutal. Friday the 13th had a fantastic opening 25 minutes. While the rest of the film didn’t quite live up to the rest, it was still better than most of the other Jason films. A Nightmare on Elm Street was not horrible, but I would much rather take the original. It has definitely been my least favorite.

By far, The Texas Chainsaw Massacre is my favorite remake to date. I had never seen the original yet when I first saw the remake in 2003. Leatherface scared me, and I completely believed the world that he was in. The prequel that came after was not my cup of tea. It tried really hard to live up to the first film, but it never quite matched it.

Last year I heard rumblings about a proposed sequel in 3D which left me less than thrilled. At the time, the technology had not been utilized very well, and I just didn’t care to see what more they could bring to the franchise after the prequel. Well apparently a sequel is still in the works seeing that Lionsgate and Twisted Pictures just hired Debra Sullivan and Adam Marcus to write a new screenplay. The duo recently wrote a bad straight-to-DVD film starring Val Kilmer titled Conspiracy.

No official details have been revealed other then the new writers, but there has been word that the film might involve some kind of a cult 35 years after the events of the original. It sounds more like a direct to DVD film. It doesn’t surprise me to see a studio wanting to cash in on a new character and the attraction of 3D. More details will be reported if any come in.

Are you interested in a new Chainsaw film? What horror icon would you rather see return to the big screen? Let us know in the comments below.