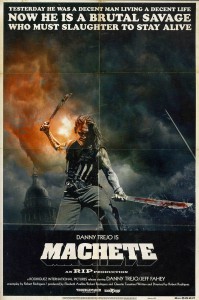 The films spawns from the faux trailer that was shown in-between “Planet Terror” and “Death Proof” during 2007’s “Grindhouse” double-feature. The synopsis for the full-length feature is as follows:

After a violent shakedown from a notorious drug lord nearly kills him, Machete, a renegade Mexican Federale and tough-as-nails vigilante for justice, roams the streets of Texas, working as a day laborer. When Machete is hired by a crooked US Senator to execute a covert hit, Machete is double-crossed and forced to run from the cops and an endless stream of assassins. But what they don’t know is that Machete is looking for them so he can settle the score.