New ‘Clash of the Titans’ Trailer 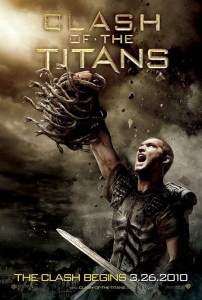 Sam Worthington is a newcomer to Hollywood, but this is going to be his third huge blockbuster CG fest since last years Terminator Salvation. With the starring role in Avatar and Clash of the Titans it looks like he is straight on the road to being an A-Lister. The only major complaint that I have about him, is the fact that he desperately needs a new voice coach if he plans to keep doing American accents. In both Terminator Salvation and Avatar I could here his Aussie accent creeping in. Most people aren’t dialect freaks like I am, so they probably won’t notice. For those of us who do though, this is a real big shock to the suspension of disbelief. It is a pretty minor complaint, but it is there.