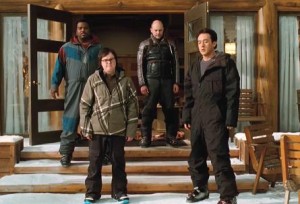 I admit it. I really love stupid goofy comedies, and I really love when they are good (Superbad and The Hangover, for instance). So, this move holds a special place in my heart. I’m hoping that it will be the next year’s best genre comedy. It has got a stellar cast including Clark Duke who had an awesome little series with Michael Cera aptly titled Clark and Michael. The trailer includes some really funny stuff  including one great Michael Jackson joke, he may be dead but the jokes aren’t.  As long as they can keep the comedy from being a little to broad (see Miss March), and really focus on the comedic talent they have. Then this should be a fun one to watch.

A group of high school pals reunite at an old ski lodge party spot after years of being apart and find that the hot tub has magical time travel powers which teleport them to 1987. John Cusack, Rob Corddry, Craig Robinson, and Clark Duke star in the MGM comedy, with Steve Pink directing from a script by Josh Heald. ~ Jeremy Wheeler, All Movie Guide