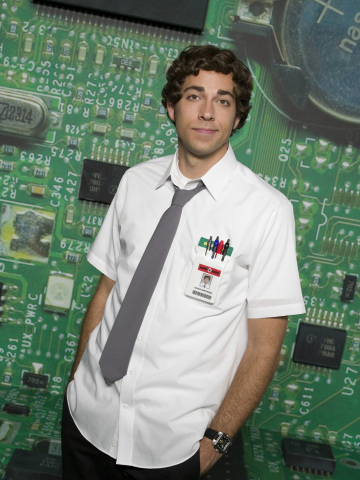 Well if you read my article on shows in danger of cancellation, there is good news for two of those shows. Chuck has been renewed for a third season! It appears that the powers that be have ordered a 13 episode run of Chuck with the possibility of another back nine order if it improves it’s ratings.

Chuck is probably one of the most fun shows on television right now. At times it seems a little goofy, but it has great characters and an awesome backstory. The last half of season two really picked the show up and I’m hoping that they can continue it’s run. However, there are some things that might effect that.

Apparently in negotiations NBC convinced WB to make budget cuts. Well, what does this mean for you guys? It means that two staff writers will be gone permanently (you may or may not notice this one) and that several supporting cast members will be in less episodes (Less Ellie and Awesome? Less Lester and Jeff?).  Another rumor hanging around is that Chuck will be moving to a Friday death slot. Most likely NBC thinks that since Chuck is an already established show with an established fan base then it will get better ratings there than most shows.

So, like always there is good with the bad. I’m just hoping that if it only lasts another 13 episodes that we can get some closure on the story before it ends. I think there is a lot more growing that the character can do.  I am with it til the end.

Good news for all you Whedon fans as well. Dollhouse has been renewed. Pretty much every website I read on this stuff has been writing it off saying it is done. Well, apparently FOX is giving it another chance next season. The show got off to a slow start with ratings and story. As the story started to pick up the rating declined. Which wasn’t a good sign for the show. Who knows why they kept it. I’m looking forward to getting a little bit more into the meat of the story next season.

And, here is for the real bad news. Terminator: Sarah Connor Chronicles has not been renewed by FOX this year. Sorry for all you fans. I’ll still be picking this one up on DVD. It would have been nice to be able to watch a third season after I was done.

Still no word on the CW’s Reaper. My best guess is that it will not make it. Which is unfortunate, because it is one of the few shows that isn’t in the CW’s normal programming.