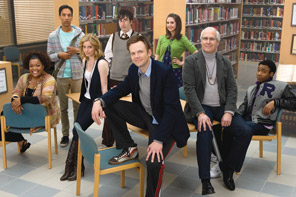 NBC’s new show, “Community,” is a half-hour comedy about a group of adults who are attending community college. The show stars Joel McHale, famous for being the host of E! Television’s “The Soup,” where he criticizes the not-so-good, the bad, and the ugly shows on television.

From Dan Harmon (“The Sarah Silverman Program”) and Emmy Award-winning directors Joe and Anthony Russo (“Arrested Development”) comes “Community,” a smart comedy series about a band of misfits who attend Greendale Community College. At the center of the group is Jeff Winger (Joel McHale, “The Soup”), a fast-talkin’ lawyer whose degree has been revoked. With some help from his fellow classmates, Winger forms a study group who eventually learn more about themselves than their course work.

Also among the series stars who comprise the group are comedy legend Chevy Chase (“Chuck”) as Pierce, a man whose life experience has brought him infinite wisdom; Gillian Jacobs (“The Book of Daniel”) as Britta, the 28-year old drop out with something to prove; Yvette Nicole Brown (“Rules of Engagement”) as Shirley, a sassy middle-aged divorcée; Danny Pudi (“Greek”) as Abed, a pop culture junkie; Alison Brie (“Mad Men”) as Annie, a high-strung perfectionist; Donald Glover (“30 Rock”) as Troy, a former high school football star trying to find his way and Ken Jeong (“The Hangover”) as Spanish professor, Señor Chang.