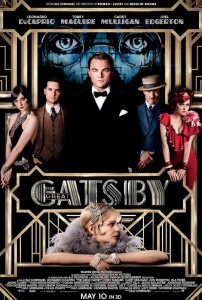 This week sees the release of the heavily anticipated Baz Luhrmann directed adaptation of F. Scott Fitzgerald’s The Great Gatsby.  Luhrmann is perhaps best known for the jukebox musical Moulin Rouge!  (That’s their exclamation point by the way; not mine.)  So far the bulk of the pre-release buzz surrounding his take on the material revolves around it’s usage of present day music.  For those of you who slept through American Lit in high school, The Great Gatsby takes place during the Roaring Twenties when booze was illegal, cheap and everywhere.  Back then jazz wasn’t that weird, esoteric music that your grandparents listen to on NPR.  No, back then jazz was that weird, esoteric music that your grandparents would listen to while making your parents.

So Luhrmann, in an attempt to recapture that element of danger, replaced (or more accurately augmented) the soundtrack with modern-day, jazz-infused hip-hop from the likes of Jay-Z, will.i.am, and Fergie.  It was a bold choice designed to remove the lacquer of nostalgia which period-authentic music would have almost certainly coated the film in.  And while it does add an element of frenzy to Gatsby’s grandiose galas, the scenes in question ultimately play such a small role that it is perhaps an unnecessary distraction.

However, this isn’t the first time a filmmaker has purposefully used music that was inauthentic for the period of film.  (Hell, it’s not even Luhrmann’s first time doing it.)  This got me thinking about other times we’ve been treated/subjected to such a device.  So here’s your list… Movies That Feature Deliberately Anachronistic Music.

Butch Cassidy & the Sundance Kid is widely considered one of the greatest screenplays ever produced by Hollywood.  Written by William Goldman the film itself is a bit of an anachronism.  Goldman injects a smooth-talking, wise-cracking, anti-establishment tone into the “establishments” favorite genre – The Western.  And, even though the film centers on a pair of criminals, he practically single-handedly invents the “buddy cop” action movie in the process.  (If you think there would be a 48 Hrs. or Lethal Weapon without Butch Cassidy & the Sundance Kid you’re sorely mistaken.)

So given that the tone of the film was decidedly modern perhaps the usage of “Raindrops Keep Fallin’ on  my Head” by B.J. Thomas seemed like a good idea.  Well, of course it seemed like a good idea or they wouldn’t have done it.  But the song is so jarring it’s hard to imagine what the filmmakers were going for other than an attempt at an Oscar for “Best Song”.  Which sadly…they got.

But all of the Oscars in the world won’t change the fact that it’s a shitty song.  How shitty? Ray Stevens turned it down.  That’s right.  When presented with “Rain Drops Keep Fallin’ on my Head” the man who sang “The Streak” and “Ahab the Arab” took a pass.

Let that sink in.