Hi there! Sorry I haven’t written in a while. Life’s been a wonderful mix of busy and hectic recently. Thankfully for you who appreciate my inane posts about baseball statistics, I should have some more free time to post on a regular basis.

I’m gonna switch the format of this entry up a bit. Rather than go with a straightforward “who’s hot, who’s not” style, I’m gonna mix in news with a few tidbits from the last few weeks.

– Those of you who were fortunate enough to attend Friday and/or Saturday’s games saw two of the best pitching performances in recent history. In fact, Friday night’s start by Shelby Miller, going from gamescore, actually ranks as THE best nine-inning performance in Cardinals history.

For those of you unfamiliar with gamescore, it’s a measurement to determine how effective a pitcher was. The score starts at 50 and then adds points for strikeouts, batters retired, etc. and subtracts points for hits, runs, walks, and such. Miller’s gamescore Friday night was a 98, outscoring every other Cardinals’ pitcher in history (for a 9-inning game, that is; other had higher gamescores, but pitched at least 10 innings). Yes, even Bob Gibson and Chris Carpenter.

Nevertheless, the baseball gods having a sense of humor, the Rockies turned the tables today and the Cardinals went into the seventh inning without a hit.

Of course, if you went to the game yesterday, you got a sweet pink Mike Matheny jersey. My lovely friend Megan and I managed to get there in time to snag one of these bad boys. 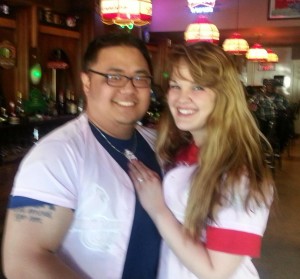 Yeah, I wore mine.

– After a mediocre start to the season, the Cardinals’ bats are finally waking up.

Four of the Cardinals starters are hitting .288 or higher:

Yadier Molina – .343, which ranks fourth in the league

Allen Craig – .295. After yesterday’s 3 for 3 game, he finally got over the .300 mark for the first time all season. Once the calendar flipped to May, Craig started hitting and hasn’t stopped. Not counting today’s game, since May 1, Craig has produced a .412/.462/.735  line while hitting his first two home runs of the season and driving in 9. Craig ranks 6th in the league in RBI with 27.

Matt Carpenter – .288. A pleasant surprise at second base, Matt’s firmly established himself as the starting second baseman. His .812 OPS rank him third on the team among starters, ahead of Matt Holliday and Craig.

– Meanwhile, Matt “Big City” Adams has done nothing but hit, even after coming off the disabled list. For the season, Matt’s now batting .484/.529/.871 with three home runs and 10 RBI in just 34 plate appearances.

– Even including today’s loss, the Cardinals’ starters have been absolutely dominant. They lead the majors with a 2.24 ERA (Detroit is second by more than a full run at 3.26). Thanks to the superlative outings by Miller and Wainwright, they also rank first in shutouts (7), complete games (5), and innings per start (6.56)

– Two rookies have joined the Cardinals’ bullpen and made a solid impact so far, Carlos Martinez and Seth Maness. Well, now another rookie will make his presence known in the rotation. Starter Jake Westbrook was placed on the 15-day disabled list with inflammation in his right elbow. Rookie John Gast has been called up to take his spot in the rotation Tuesday and will make his major league debut Tuesday.

Gast has been terrific at Memphis (3-1, 1.16 ERA through seven games) and started the season with 32 consecutive scoreless innings. He’ll provide the team with a second left-handed arm in the rotation.

Meanwhile, at Memphis, the Cardinals’ top prospects have gotten off to a solid start to the 2013 season.

Kolten Wong, who many project to be in the majors next season as the Cardinals’ second baseman, has a solid .293/.313/.414 line. He hasn’t been drawing too many walks, but his plate discipline should improve as he adjusts to the pitching.

Ryan Jackson, who’s spent time on the Cardinals’ bench, has gone .347/.421/.455 in 118 plate appearances while splitting time at third and shortstop.

Oscar Taveras, the team’s top hitting prospect, is hitting .314/.349/.483 with four HR and 20 RBI. At 21, Taveras is the youngest position player on the roster (Greg Garcia, the second-youngest, is 23), but he’s projected to join the Cardinals next year, if not this year as a late-season call-up.

The Cardinals continue their ten-game homestand with the Mets coming into town. Unfortunately, the team will miss rookie phenom Matt Harvey, who pitched today. They’ll host the Mets for four games, then the Brewers will close out the week with a three-game series.