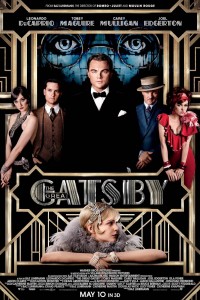 How do you adapt one of the greatest American novels ever to be written?  If you look at the history of The Great Gatsby, the answer would be “Often, with mainly negative results.” Many people still remember the Jack Clayton directed, Francis Ford Coppola penned adaptation starring Robert Redford, Sam Waterson, and Mia Farrow, but even that film is considered flawed compared to the book it takes its name from. It was hard not to be excited when Baz Luhrmann signed on to have a go at the famous material. Reactions from the beginning were mixed, but after the casting of numerous stars, there was a sense that the film could be everything people expected it to be.  What could go wrong?

Nick Carraway (Tobey Maguire), our narrator, comes to us as an outsider among the glitz and glamour of Long Island in the middle of the roaring twenties. He makes a modest living in the hot trade of bonds, and has grabbed a cottage in the prestigious area of West Egg, positioned among the modern day castles of the princes and princesses of American wealth.  Despite not being one of the wealthy members of West Egg, he still has plenty of connections, his second cousin, Daisy (Carey Mulligan), and her husband, Tom (Joel Edgerton), have a palatial estate across from Nick’s cozy cottage. Through them Nick becomes the middle man in a series of events between Tom, his mistress, the mysterious Jay Gatsby (Leonardo DiCaprio), and Daisy. Revealing that money doesn’t solve everything, and that you can’t change the past.

Luhrmann has a style all of his own, for all its beauty, it still contains lots of flaws when not executed correctly. Luhrmann films are slightly manic at times, but in the case of something like Moulin Rouge, the film finds its footing a bit further into it and becomes a charming tale. The Great Gatsby starts off with the same manic start, with overlays, brilliant colors, and anachronisms that fly like confetti. However, it never finds its footing and tumbles into a giant mess at points in the film. This quick, no coming up for breath style leaves Luhrmann’s actors hanging out to dry, as his style overshadows any possible performance they could put out.

The cast is talented, but none of them embody a role that will garner them any praise that will last a lifetime. Some of them might even view it as a black mark on their film history when everything is said and done. That isn’t to say anyone is truly awful, but none of them rise above the spectacle. Rather they blend in and become part of the elaborate set pieces. Both Joel Edgerton and Leonardo DiCaprio come the furthest in their endeavors, and leave the most lasting performances of the film.  Carey Mulligan is as cute as a button, but never embodies the presence required of her character.  If it weren’t spelled out so plainly by the story, many people would be left wondering why Gatsby is so enamored by her. Maguire is forgettable, and recalls more of his days as Peter Parker than of the man in the middle, Nick Carraway.

Luhrmann has a polarizing style, and is more obvious here than any of his other films to date.  The anachronisms of Romeo + Juliet and Moulin Rouge were charming, if a bit off putting at first, but they worked with Luhrmann’s style. When you hear Jay-Z and Beyonce blaring in the place of the roaring jazz of the 20s, it’s like a punch in the stomach. The anachronisms are so few and far between, that when they happen, they pull you right out of the film.  These mere afterthoughts don’t blend with the film, and instead have a jarring result that will turn the stomachs of many.

The Great Gatsby is a full visual realization of the novel it is based upon, but lacks the heart and conviction of the novel. It’s beautiful on top, but underneath it has a number of missing components that keep it from being something great or even something good, for that matter. The film is available in 3D, which is evidence of the studio cash grab, as it serves no purpose other than to stack another couple dollars onto the price of admission.  3D will start losing its significance if films like Gatsby continue to use it.

If you are a big fan of the original book, it’s probably advisable to wait for this in a cheaper medium. Regardless, if you go see it while it is in theaters, you’ll at least have a number of great visuals to keep you entertained.