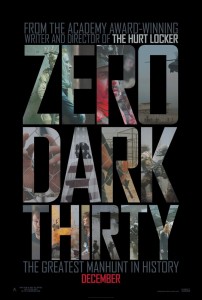 If you have seen Academy Award-winning best picture The Hurt Locker, you know that Kathryn Bigelow is no stranger to slow-building tension. Somewhere between Point Break and 2008, the Oscar-winning director went from being good to great. And her streak certainly continues with Zero Dark Thirty.

Maya (Jessica Chastain) is a young CIA agent who’s first assignment was investigating the September 11 attacks after their occurrence. In 2003, she is reassigned from her DC office to work at the US embassy in Pakistan. It is there that Maya observes the torture techniques that are used to try and get information from terrorist detainees. Although she seems uncomfortable with the tactics administered by her partner Dan (Jason Clarke), she eventually grows the strength to confront the prisoners. They eventually find a way to get one of them to talk, leading her on a hunt for a man named Abu Ahmed that appears to be a ghost. She follows the lead for several years, determined to link him to Bin Laden. Throughout that time, she struggles with overcoming doubts from her superiors – as well as the lack of certainty required to make a move.

If an action-packed war movie is what you are looking for, like Act of Valor or Saving Private Ryan, you have come to the wrong place. The film doesn’t take place so much on the front lines as it does in the office. But that doesn’t make it a bad thing whatsoever – just make sure you have your expectations set accordingly. There are some extremely well done scenes toward the end of the film where we get into some action, but it is a long ride to get there. But along the way, we experience some incredible performances, seat-grabbing tension, and an intriguing story of what happened between the terrorist attacks in 2001 and now.

If Jessica Chastain wasn’t on your radar after seeing The Tree of Life or Lawless, she certainly will be after Zero Dark Thirty. She puts everything she has on the table, and gives an incredible performance in the lead. You feel like you are right there with her, going through an array of emotions as she deals with not only National security – but also keeping herself and her colleagues alive. Credit has to be given to the direction of Bigelow, as she did the same thing in The Hurt Locker. You watch Chastain’s character go from practically a rookie to an expert over almost a decade, and you get to know her along every step of the way.

Jason Clarke also deserves mention as Dan, the agent that shows Maya the ropes when she first gets to Pakistan. He exhibits a tough exterior, while remaining relatable as a guy just doing his job. You can tell that the work his character is doing is wearing him down, as he tells Maya that there is only so much he can take. He tells her that he needs to get out, and suggests that she does the same. Kyle Chandler plays Joseph Bradley, their superior agent, who tries to reel Maya in after years of chasing her lead. Their confrontations play out well on-screen, and it is fun to watch Maya tell him who is boss.

After hearing all of the buzz surrounding Zero Dark Thirty, it certainly lives up to its expectations. The movie is well filmed, brilliantly acted, and eye-opening into the behind-the-scenes operations that took place after 9/11. Director Bigelow seems to have found her genre, and I am interested to see whether or not she will branch out or continue with military films. Jessica Chastain is the front-runner for Best Actress this year, and certainly deserves it. If you enjoyed The Hurt Locker, and aren’t opposed to a slow-building pace, you won’t be disappointed.

Zero Dark Thirty is an A+