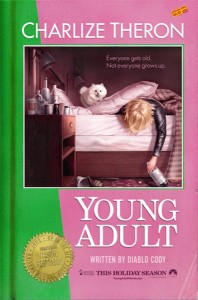 If I’m honest with myself, I was a little more excited for Young Adult than I should be, but I largely consider Jason Reitman to be one of the best up and coming directors in Hollywood. With efforts like Thank You For Smoking, Juno, and Up in the Air, he has bowled me over with his uncanny ability to construct a great story around unfortunate circumstances. I went into Young Adult with high hopes because of that, what I left with, is a different story.

Mavis Gary (Charlize Theron), the writer of a semi-popular teen series, has just received an email announcing the birth of a child. While normal circumstances might draw a smile from most people, Mavis is in a different category. This email was sent by her high school and college boyfriend, Buddy (Patrick Wilson). Mavis, who is not happy with her current life, decides that this is the opportune moment to go to her small Minnesota hometown and win Buddy back. When she arrives, she goes on a self-destructive path that threatens the marriage of Buddy, and begins an unlikely friendship with, Matt (Patton Oswalt), a person she largely ignored in high school, and only knew him for the torture he received at the hands of a few high school jocks.

Young Adult is hard to watch at times, Mavis throws herself headfirst into every situation without thinking of consequences for herself and others. It is uncomfortable watching a grown woman, who is in a state of arrested development, embarrass herself in every situation. It becomes quite clear throughout the course of the film that the first impression the character being a sociopath with a dash of narcissism, isn’t completely far off.  With each subsequent event the character becomes harder to watch. At times, I found myself thinking that if she wasn’t so beautiful and decently successful, people would’ve had her seek out professional help a while ago.

This might be where my problem with Young Adult lies. I’m so used to Reitman’s casual way of turning people that should be despicable (a D.C. lobbyist and a man who fires people for a living), and turns them into affable every man characters. Instead we are treated to a character we should pity, but instead only end up despising. I understand that the film is a black comedy, but Mavis Gary has not a single reedeming quality about her, other than her looks. Even the moments where she treats Matt friendly are due to ulterior motives.  How can you enjoy a movie when you hate the main character?

This is no fault of the actors though, who all do a superb job in their roles. Theron almost oversells the role, and might cause a bit of the problem. As a secondary character, she could have been amusing, but trapping us with her the whole movie stifles any cleverness that may pop up. Patton Oswalt is the standout in the film, leading much of the little comedy that comes from it. He isn’t the only character in the film who isn’t an idiot, but he certainly is the only one you care about.

This is Diablo Cody’s most adult script to date, and much to my delight she doesn’t try to be too edgy with the dialogue like she did in previous films. She might have been better served by adding a bit of quirkiness to her main character to lighten the  mood by just a smidgen, and the film could have possibly been saved.

I’ll continue to look forward to Reitman’s releases, but I might have to temper my excitement by a bit, because this proves that nobody bats 1.000.