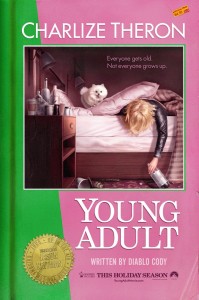 Charlize Theron has transformed herself again, only instead of the prosthetics and make-up necessary to make her ugly for Monster, Young Adult’s Mavis uses prosthetics and make-up in a painstaking routine to make sure everyone knows she is beautiful.  Mavis is in her late thirties, by all means an adult, but whether due to the idealism she has for the past, or her job as the ghost author of a struggling teen fiction series, she has not managed to outgrow her high school years.  She chugs diet coke when she wakes in the morning, falls asleep to reality shows on the E! Channel, and creates the delusion that she can force her high school sweetheart Buddy (Patrick Wilson) to fall in love with her again despite his devotion to his wife (Elizabeth Reaser) and new baby.

Mavis is a depressed alcoholic, so the question of what exactly motivates her to pack her suitcase, five pound dog, and ten pounds of cosmetics in order to hit the road home to her teeny Minnesota town never feels concretely answered, though the invitation to a celebration of the birth of Buddy’s child is the catalyst.  Of course, boredom, loneliness, and booze can be great motivators for irrational behavior.  As intelligent and lovely as Mavis is when sober—if also proud, self-centered, and a bit cruel—she becomes a different creature when drunk: sad, thoughtful, a trainwreck, the kind of person you feel sorry for.

Her first night back in town she finds a drinking buddy in former classmate Matt (Patton Oswalt).  At first glance he seems like your regular townie, but soon we realize (along with Mavis) that there is more to him than a leg brace and a persona that leads everyone to think he is gay— he is a bear (or perhaps an otter) in appearance rather than sexual preference.  Matt and Mavis unwittingly—and in various states of drunkenness—create a bond that develops believably, so that when an event takes place between them near the end of the film, it feels natural because of the progression of the script and not thanks to the many sitcoms starring overweight men paired with gorgeous women.  Oswalt manages to be both funny and sincere and maybe the most fully likeable character in the entire film.  He also has the best line in the movie as his Matt the nerd tells popular girl Mavis, “Men like me are born loving women like you.”

With Young Adult, Director Jason Reitman continues his exposure of Midwest culture from his previous effort Up in the Air.  There is a scene where Mavis drives into town at dinnertime and passes restaurant chain after chain, finally ending up at a local bar.  Although I wasn’t sure if this was judgment or merely product placement, there is no denying that small towns in particular have been infiltrated to a fault by these types of restaurants.  The town is small, charming, and claustrophobic, filled with impossibly friendly people, making it easy to identify with why Mavis would leave and why she also might think she wants to return.

Diablo Cody has written a script as mature as the person Mavis would perhaps aspire to be.  While Cody’s Academy Award winning screenplay for Juno resided in the very high school culture Mavis looks back on fondly, Cody must have realized with the relative disappointment of Jennifer’s Body that something about her writing needed to change.  Her work has evolved, and while at times I missed the youthful oddball jargon that helped to give her a name in Hollywood, by no means is Young Adult lacking in quips or wit.  One of Mavis’s pastimes to inspire her writing is to listen in on the conversations of local teenagers, usually young girls in the midst of first love.  Words like, “You’re my sun, my moon, my stars, my whole galaxy.”  The lines that so effortlessly fall from their mouths are at once endearing and naïve, Shakespearean in nature yet permeated with remnants of Jersey Shore culture.  Most importantly, we find that these words are only fit for the youthful lips that speak them, so that when Mavis tries to use them sincerely in her own life, we feel nothing but embarrassment.  But though Mavis is self-sabotaging and mostly lacking in good judgment, it was never possible for me to hate her.  I hated myself a little bit that there were certain parts of her person to which I aspire.  The film itself, however, was very possible to love.