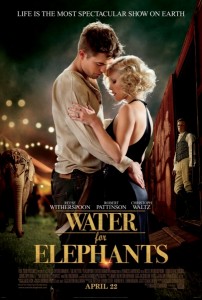 In all likelihood how Water for Elephants does at the box office rests more on the shoulders of Twilight star, Robert Pattinson, than it does the actual quality of the film. Twilight-mania has continued to sweep across the nation, and those even associated with the films are seeing a boost in their careers due to the extensive fan base. Which is actually quite a shame, because Water for Elephants is a touching film that really should be viewed in its own right, not just as “the movie Edward from Twilight did on a break in filming.”

Jacob Jankowski (Robert Pattinson) has it all, when seemingly no one else has it during the Great Depression. He has loving parents, is almost completed with veterinary medicine at Cornell, and a increasingly bright future ahead of him. However, due to an untimely accident, and the mishandling of money by his father to pay for his Ivy League education, Jacob is left alone and penniless. Not knowing what to do, Jacob starts his trek to a change of scenery, and hops aboard a moving locomotive.  This train is no ordinary train, it is a train for a traveling circus.

Despite a privileged up bringing and Ivy League education, Jacob quickly acclimates himself to the circus. When it is discovered he has experience with animals, and is a trained vet, owner of the circus, August (Christoph Waltz), hires him as a vet. August is a shrewd man who at one moment is charming, and the next a psychopath who throws people off trains for disagreeing or so he doesn’t have to pay their wages. When Jacob meets the star of the show, Marlena (Reese Witherspoon), a beautiful performer who also happens to be August’s wife, it is love at first sight.  When August buys an elephant as a new star attraction, Marlena and Jacob are forced to deal with their feelings while working with each other.

The film is beautifully shot, with fantastic sets, beautiful lighting, and stunning costumes. Water for Elephants has the look of an older film, but with much brighter clarity in the shots themselves. In fact, probably the best thing about the film is how well they captured the era, while still isolating themselves from the complete despair of the Great Depression.

Standing head and shoulders above everyone else once again is the talented Christoph Waltz, whose performance may not bring him another Oscar, but will continue to bring him accolades. Much like his role in Inglourious Basterds, Waltz once again plays a charming psychopath. His role as August opens him up to a bit more rage than his Oscar winning role, but shows how easily he can slip into the role of a villain you can almost sympathize with.  There are very few people who can walk the thin line Waltz does in his performance, and it makes the film much better because of it.

Robert Pattinson and Reese Witherspoon individually do a nice job, but don’t seem to have a lot of magical chemistry that the film implies they have. It could be the fact that Witherspoon’s Marlena is supposed to be similar in age to the just out of college Jacob, despite the fact that she looks 10 years older. Although, I was willing to overlook that in the face of a heartfelt story. While the actors don’t do much to sell the chemistry between the characters, the film itself is convincing enough on its own.

Water for Elephants is a film that may be slightly inconsistent at times, but it will produce its fair share of awe, and will illicit a number of tears from others. It is a genuinely heartfelt film that will most likely take its place next to films like The Notebook as favorite date night movies chosen by women.