You hungry? Want something to eat? Oh, nevermind, you don’t like the food here.

It’s alright, though. I’m sure there are lots of great restaurants in Cincinnati for you to go home to. I mean, Cincinnati was the birthplace of 98 Degrees, so clearly the town has great taste.

Don’t worry, Brandon. Nobody’s forgotten last year, when you called the Cardinals “little bitches.” We certainly remembered your offer to play the Cardinals on one leg. You might want to play on both legs this time, Brandon, because with the way you played in that series (a whopping 2 for 14), you certainly didn’t play like you had anything between them. 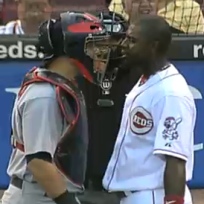 "You have the whitest white-part-of-the-eyes I've ever seen."

So go ahead; talk your trash. If you back it up this weekend, so be it. From all accounts, you’re a hard worker and a solid ballplayer. I have no doubt if you were a Cardinal, you’d be one of my favorites.

There’s just one thing: you’re not. Your old pal Chris Carpenter pitches Saturday, so in the immortal words of Ray Liotta/Joe Jackson, “watch out for in-your-ear.”

By the way, the GTMI in the title is something I took from the Tampa Bay Rays. GTMI is simply a colloquialism that stands for Get The Mother[censored] In and means score the run at any cost. The Cardinals aren’t necessarily going to outslug every team, but they can create a lot of runs with aggressive play, something they are going to have to do consistently throughout the season.

This might be, to date, the best series in baseball this season. After starting out on a roll, the Reds have dropped six of their last eight games, perhaps remembering that they are, in fact, the Cincinnati Reds, and they haven’t been consistently competitive since the days of Marge Schott and her WHITE POWER trip.

The Cardinals, on the other hand, woke up after their 2-6 start and have gone 8-3 since, unveiling perhaps the best overall offense in the league. In those 11 games, they have scored 83 runs, an average of 7.5 a game.

The best part of it is that, unlike years past when Albert Pujols alone had to carry the offense at times, the lineup is getting offensive contributions from top to bottom. Pujols has returned to his typical form, going 14-42 (.333) with five HR and 10 RBI in his last ten games. Matt Holliday, Lance Berkman, and David Freese all have ten or more RBI, and Colby Rasmus isn’t far behind them. The Cardinals are first in the majors in average, first in OBP, and third in slugging.

Best of all, they’re also doing it with pitching. Jake Westbrook and Ryan Franklin are struggling, the episodes for the latter having been well-documented. The rest of the rotation and bullpen, however, have picked up the slack, and the Cardinals rank sixth in the NL in ERA (3.48) and average (.243).

Let’s hope the rain holds off enough for them to get this series in. The Cardinals finally have their heads above water for only the second time this season. They’re treading water, time to start swimming.

Here’s to hoping we’ll see a hard-fought (not literally) weekend of baseball. We got this.