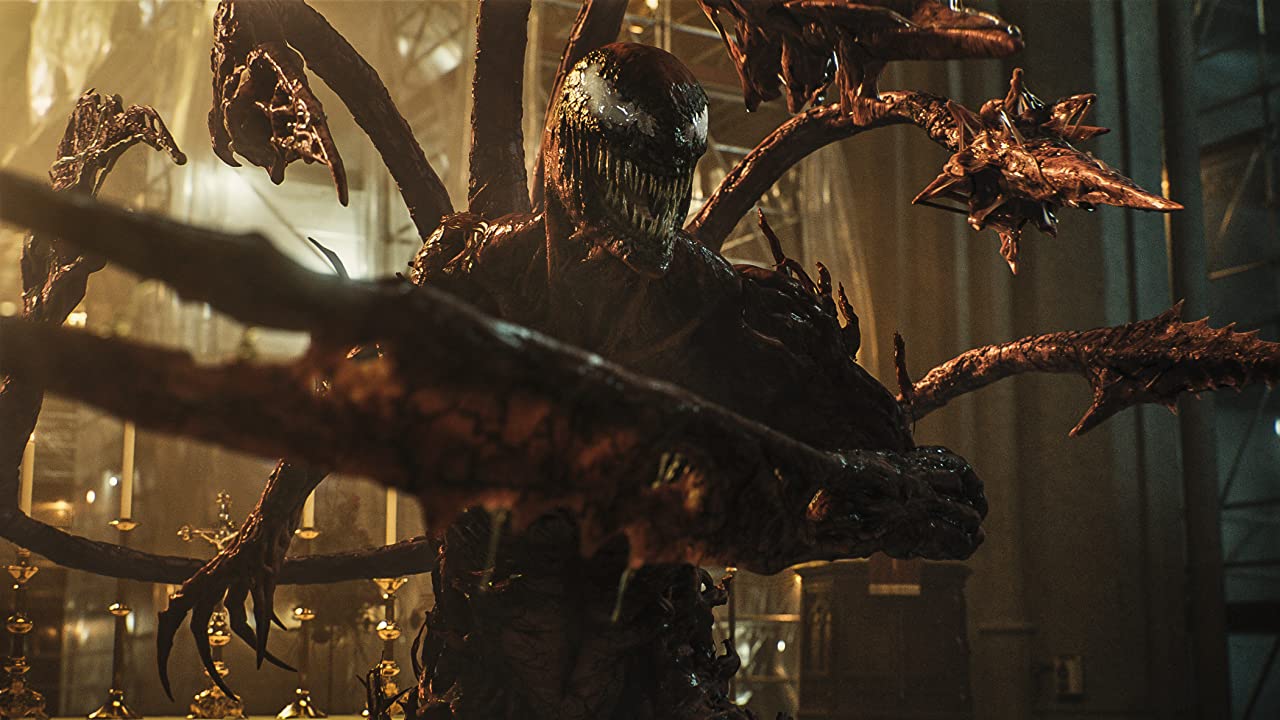 Did anyone else know Andy Serkis is now directing films? What’s that? Everyone knew and I’m just out of the loop? Oh, okay…

With 2018’s Venom being a box office, if not a critical, hit, I figured director Ruben Fleischer would have helmed the sequel. It was a bit of a surprise to see Andy’s name in the director byline, but as it turns out, Fleischer was working on the sequel to another hit, Zombieland, and was unavailable.

In stepped Serkis who, despite my intro, has actually only directed two other films – Breathe and Mowgli. Although some might question how a relatively inexperienced director might fare with a big-budget comic book film, he actually stepped into a relatively advantageous situation. Several of the featured cast from the first film (Tom Hardy, Michelle Williams, Reid Scott) are reprising their original roles. Venom is a pretty well-known character that should have a built-in audience. On top of all that, well, let’s be honest; based on the reviews of the first film, there probably weren’t sky-high expectations. I wasn’t a massive fan of the first, but I enjoyed it, particularly the Odd Couple-esque relationship between Eddie and the symbiote, so I was at least hoping for some more of the same.

Set in the present day, the film starts with a flashback revolving around Cletus Kasady (Woody Harrelson), who is featured in the mid-credits scene of the first film. Locked up at St. Estes, his only true friend (and romantic interest) was Frances Barrison (Naomi Harris) before she was whisked away to Ravencroft to be isolated due to her sonic abilities.

Meanwhile, Eddie Brock (Hardy) has returned to journalism while secretly maintaining the symbiotic relationship with Venom. Upon getting the chance for an exclusive interview with Cletus, on death row for being a really bad guy, he accepts, but manages to get too close to Cletus, who bites him and manages to transfer a bit of the symbiote to his system, which manifests as Carnage, a symbiote who is stronger and more aggressive than Venom. Utilizing his newfound abilities, Kasady escapes and frees Barrison, setting off the events of Let There Be Carnage.

Perhaps the easiest way to describe the theme of Let There Be Carnage is relationships. Although the film obviously has its share of action and comedy, the bulk of the story revolves around the interaction not only between people, but people and their symbiotes. Kasady breaks out Barrison out of love but must also deal with the malevolent desires of Carnage, which is shown to care little for Barrison. On the flip side, Eddie is still adjusting to the relationship between his ex-fiance (Williams) and her current partner (Scott) while struggling to maintain a balance with Venom, who grows increasingly listless while yearning for brains (under the guise of being a lethal protector). It’s the main source of humor in the film, much like the first film.

In fact, perhaps the greatest compliment I can give about the film is that it’s essentially a continuation of the tone of the first film. This movie doesn’t break any new grounds; it treads the old, but it does it well enough that it doesn’t feel super repetitive. If you liked the Jekyll and Hyde relationship in the first film, you’ll find plenty to like here.

That will likely be about all you’ll find, though. The first film took criticism for its weak story, and not much has changed. The story in Let There Be Carnage just never really takes off, and as it unfolds, it tends to be rather predictable. Hardy helped write the screenplay along with Kelly Marcel, but aside from some memorable jokes and dialogue, there isn’t much else there.

The bottom line: if you liked the first film and its charms, you’ll likely really enjoy the second. I didn’t hate it or anything, and I found myself entertained for the 90 minutes I was there. But as soon as I left the theater, I could almost wipe it from my mind, as opposed to remembering it vividly. There is a mid-credits scene that I recommend you stick around for, especially if you’re a fan of other superheroes in the universe, but I won’t spoil it. You could do far worse than Venom: Let There Be Carnage, but you could do a lot better, too.