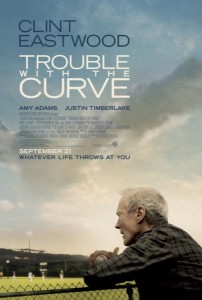 Baseball has long been a romantic subject in the world of film. Most Americans have an appreciation, if not a love for the game, and it comes through strong in our popular culture. Ask just about anyone, and they can name their favorite film to do with the sport. Some might say Field of Dreams, Sandlot, A League of Their Own, The Natural, or other fantastic films that surround the sport. It doesn’t look like Trouble With the Curve will join the pantheon of baseball favorites, but it has enough entertaining value to occupy the average film patron.

Gus Lobel (Clint Eastwood) is an aging scout for the Atlanta Braves. His walls are filled with pictures of him and baseball greats who he has at one time scouted. His knowledge of the game is unparalleled, but in an age where computers are dominating the sport, Gus is being left behind. Nearing the end of his contract, Gus begins to have vision problems. This problem might be a huge deal for other lines of work, but when your job is to put your eyes on high valued talent, it could mean an end to a career. Back in the Braves home office new blood, Phillip Sanderson (Matthew Lillard), doubts the skills of Gus’s expertise. While Scouting Director and Gus’s old friend, Pete Klein, are willing to give Gus one last shot by scouting a potential number one draft pick.  Sensing a problem, Pete sends Mickey, Gus’s daughter, to watch over him and help him with his scouting duties. Mickey must struggle to maintain a relationship with her often grumpy father, while maintaining a presence at her high profile law firm, where she is up for partner. When she meets young scout, and former Gus pick, Johnny Flanagan (Justin Timberlake), she has to find a new purpose.

Trouble With the Curve is a mixed bag. On one hand it has a group of charismatic actors who do well in their roles.  On the other hand, it lacks clear character motivation, at times. The film is entirely obvious in its motives, which leaves no sense of suspense in any portion of it. The antagonists are so over the top that the film might have been better off using arrows which say, “THIS IS THE BAD GUY!”. The only characters which aren’t caricatures are the leads, which is enough to save the film. Despite a story that can carry them all the way through, Amy Adams and Justin Timberlake have great chemistry together, and make lines that could possibly sound hokey in another’s mouth, into something endearing.

There is no doubt that Clint Eastwood can convincingly play a grumpy old man with the best of them, but the curmudgeon act gets a bit old after a bit. In fact, the surly attitude feels forced, and a bit over the top. Eastwood appears to be phoning in his performance with pieces of Gran Torino. It makes him a less than capable lead at times.

The movie ties up every loose end with a bow, and will surely jar your suspension of disbelief by the end. If you ignore the flaws, and concentrate on the more polished portions of the story, you can have a solid time at the theater. Although, to be honest, this one might be better saved for an evening on the couch once it hits DVD.