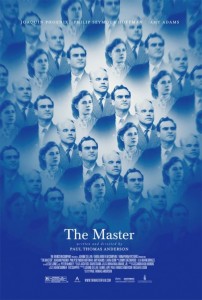 The opening shot of The Master is of water; the white foam of ocean left in the wake of a fast moving ship. It’s an image that writer and director Paul Thomas Anderson returns to throughout the film and a fitting one given that the film is about two men adrift. Frank Quell (Joaquin Phoenix) is a sailor on that ship. More importantly, he is a “seaman,” one of the lowest ranks in the Navy. He and his shipmates are waiting for World War II to be officially declared over. Quell is implosive, impulsive, irresponsible and adept at little other than fighting and concocting intoxicants from whatever chemicals are within reach. After the war he takes a job as a department store photographer, but he doesn’t find civilian life any more welcoming than he did military life. (Though the chemicals used to develop the negatives do come in handy for his amateur mixology.) When Quell stumbles upon (and I do mean “stumbles”) Lancaster Dodd (Philip Seymour Hoffman), it is these homemade cocktails over which they bond.

Dodd is a self-proclaimed “writer, doctor, nuclear physicist and theoretical philosopher.” Dodd surrounds himself with an odd assortment of associates: a conglomeration of family members, socialites and housewives. The only price of admission is being a sycophant. Much has been made of the film’s connection to Scientology and, while Lancaster Dodd is clearly modeled on L. Ron Hubbard, the religion-cum-“self-help” course central to the film is almost beside the point. The belief system, like Dianetics, is a sci-fi inspired hodge-podge of common sense and nonsense. Then again, if you replace the word “sci-fi” with the word “mystical,” you could say the same thing about virtually any religion (other than, um…your own, of course). But ultimately Dodd does seem to have genuine affection for, if not outright attraction to, the man. Quell, after all, is a destitute and drunken drifter. He isn’t one of Dodd’s socialites who provide him access to funds and various other luxurious sundries. When viewed through that prism, it’s difficult to find a motivation for Dodd other than altruism. And even if his quasi-religion is nothing more than platitudes passing for profundities, if people find solace in that…who are we to judge? I believe it was philosopher and theologian St. Thomas Aquinas who once famously opined, “Fifty million Elvis fans can’t be wrong.”

The first lesson any “Introduction to Creative Writing” teacher bestows on a pupil is “don’t tell me, show me.” Anderson has clearly taken that lesson to heart. The film is maddeningly devoid of exposition. That’s not to say there isn’t any. But a character never sits you down for an information dump. Instead, details are doled out in cryptic dribs and drabs – a stray line of dialog here, a circuitous glance there. Some of it is revealed so subtly that you don’t realize that you’ve learned anything until several scenes later. I can’t help but feel even more will be revealed upon subsequent viewings. However, this storytelling device will probably drive away as many people as it draws in. The film isn’t plot-driven in the traditional sense; it drifts from one moment to the next – not unlike Quell himself.

The film has as much to do with “religion” as Citizen Kane does with “newspapers.” It’s the setting, not the story. This isn’t about “the belief,” it’s about “the believers.” Hoffman gives a pitch perfect performance as the pompous and grandiose leader. He’s charismatic and enthralling without devolving into preacherly clichés. He makes it easy to see why people would be drawn in and even easier to see why they might turn a blind eye (not to mention buy in) to his wilder flights of fancy. Meanwhile, Phoenix matches him note-for-note. He is gaunt and his physicality is entirely different. His gait has changed and his posture is slumped and sunken. The film is worth seeing if for no other reason than to watch these two actors line-up against each other. It’s a lushly photographed film and painstakingly staged. However, despite its ambition (or perhaps because of it) it can be an easier film to admire than it is to enjoy.