Pick of the Week: Nightwing #0 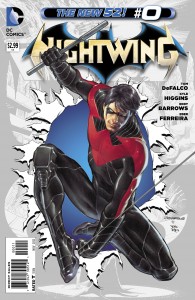 We are in the second week of DC’s “Zero Month” and are treated to an amazing issue of Nightwing.  This book retells the origin of the original Robin and current Nightwing, Dick Grayson.  Nightwing is a character I have identified with since 1996 when I picked up the first issue and was hooked.  The dynamic art style of Scott McDaniel (original Nightwing artist) and the great story telling of Chuck Dixon made Nightwing one of my favorite books.  Now Kyle Higgins and Eddy Barrows are putting together a run that could be as good as the original.

The origin of Nightwing remains fairly intact in this Zero issue.  Dick Grayson is part of the the “Flying Graysons” (an acrobatic family attraction).  When the owner of Haly’s Circus can’t pay the local mob boss, hitman Tony Zucco cuts the rope on the Graysons.  While Dick looks on, the rope snaps and the Graysons fall to their deaths.  Bruce Wayne is in the audience and agrees to keep Dick safe until Zucco is caught.  Dick begins to look up everything he can on Zucco, sneaking out at night to look for the man who killed his parents. Eventually, Dick stumbles upon Batman fighting a group of thugs.  Dick jumps into the fight to save a hostage.

After a couple nights fighting side by side, Batman takes Dick to the Batcave, and Dick tells Batman he knows he is Bruce Wayne.  Dick offers his help, and Bruce begins to train him.  After a few months, Dick is chomping at the bit to get out and fight with Bruce, but he’s not allowed.  When Batman looks to be in trouble, Dick leaps at the opportunity.  He dons a new costume and races to Batman’s side.  Again, Dick jumps into the fight, but this time he procedes to get his ass kicked.  When it is all over, Batman tells Dick he shouldn’t be wearing the costume and isn’t ready.  The final scene really hammers home the tension that will force Dick from Robin to Nightwing.

The writing on this book has been outstanding.  Kyle Higgins uses the reboot to tell new stories about Dick’s past, including more about his return to Haly’s Circus.  The few changes to the Dick Grayson character have been handled well by Higgins.  One change makes Dick the next in line assasin for the Court of Owls.  Another interesting change, reminiscent of the Jon Blake character from The Dark Knight Rises, is the tell that shows Dick that Batman is also Bruce Wayne, similar facial tics.  Higgins also blends the origin story of Tim Drake (the third Robin and current Red Robin) into this Dick Grayson story.

Higgins nails the fact that Dick and Bruce have many similarities but are different at their core.  Bruce lives his life constantly trying to avenge his parents.  He never allows himself to heal from their deaths.  Dick, on the other hand, begins healing from a very young age and is not as “hard” as Bruce.

The art on Nightwing has been great.  Eddy Barrows’ style harkens back to Scott McDaniel’s.  I’ve been a big fan of Barrows since I saw his work on the 3rd volume of Teen Titans.  He’s gone on to work on Blackest Night: Superman and Superman, but this is the best work I’ve ever seen from him.  He perfectly captures the athletic ability of Dick Grayson.  Barrows is able to make him look agile and graceful while kicking ass.  Dick doesn’t move like Bruce, and Barrows knows that.  Bruce has a ground based fighting style versus Dick’s gymnastic and parkour based fighting.  The only drawback in the art is the Robin costume.  I’m not saying that he needs to wear the trunks and pixie boots, but I just wasn’t a fan of the new design.  The colors were fine, but there was too much going on.  The simpler the better.  Overall, Eddy Barrows is doing a great job on this title.

Nightwing is one of my top five books of the reboot.  It’s the perfect blend of drama, action, and humor with similar qualities to the Batman books but with more lightness.  Nightwing is a lighter character than Batman.  He doesn’t hold onto the darkness as Bruce does.  There’s a line that sums this up in the book: “Two people who want the same thing rarely see eye to eye on how to get it.”  Nightwing is a great read, and Issue Zero is a good jumping on point.  If you haven’t read the book so far, go grab the first trade.  If you’re looking for other Dick Grayson stories, I recommend Batman: The Black Mirror, Robin: Year One, or Nightwing: Year One.