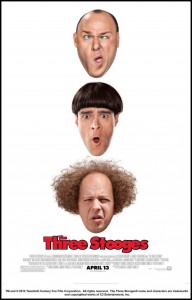 The Three Stooges have been making audiences laugh for over 70 years and to this day are still being passed down from generation to generation like a prized family heirloom, which is why it might be hard for some people to think of the Stooges not as members of the family who have had a hand in raising their children, but a property that can be bought, sold, and revamped like a terrible Hannah Barbara cartoon or a Hasbro board game.

The iconic lineup of Moe Howard, Larry Fine, and Curly Howard are arguably the three most beloved actors since the invention of the moving picture, but the act known as The Three Stooges has had so many different cast members that it shouldn’t be that hard to understand that making a movie 30 years after the last stooge has died isn’t exactly sacrilege.

The original Stooges short films were filled with stereotypical characters and formulaic plots so it should come as no surprise that directors Peter and Bobby Farrelly have done the same with their version. The only things that really matter when it comes to getting the Stooges right is that the leads possess the same charisma the originals had and that the physical comedy be as inventive as possible, and based on that, this movie is–adequate.

The first half is actually quite enjoyable and really captures the spirit of what makes the Stooges so endearing. The film begins with the three infant brothers thrown out of a car, in a duffle bag, and onto the steps of an orphanage where the nuns raise them for the next 25 years. What helps make this whole sequence so great is that there is never a year attached to what is happening. Except for the arbitrary pop music, It all feels timeless and the stunts are borderline genius. But when the orphanage is in danger of closing and the Stooges depart for the big city in hopes of raising the money to save it, that is when the graves of Moe, Larry, and Curly start to rumble due to excessive grave spinning.

Hollywood studios love to swallow up forgotten children’s fare and then regurgitate it back into the mouths of the unsuspecting youth and their nostalgically depressed parents by having the beloved characters navigate the modern world without a clue about what has changed, awkwardly sing or rap a song for no good reason, and wear hoodies. The Farrelly’s manage to check off every box on that list, and to add insult to injury, they use the most clichéd plot device known to modern entertainment industry–”We gotta raise the money to save the thing!” (I used a cliché in that last sentence to prove my point that clichés are annoying). And no, there is nothing redeeming about The Jersey Shore cameo that goes on far too long.

Lately the Farrelly brothers are more known for their scenes of crude humor than their ability to make an engaging film from start to finish, and even with a PG rating, The Three Stooges manages to get a few memorable ones in. There is also very obvious talk of murder and cancer and lingering shots of Kate Upton in a very revealing nun-kini but I doubt any of it will scar a young child, especially if like most 11 year olds, they are already cutting throats in their Call of Duty video games every night.

The ending has no real pay off and made me feel like the previous hour’s journey was pointless, but what really kept my attention was watching all of the actors portraying the Stooges, even the kids, transcend simple impression and really make these characters come to life.

I definitely don’t feel like a sex crime was committed against my childhood, and when it comes down to it, seeing Larry David (Curb Your Enthusiasm) play a husky voiced nun was worth the price of admission.