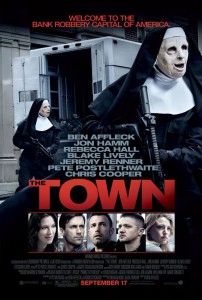 The Town is Ben Affleck’s second effort as a director, and I think I may like him better directing than acting.

The Town is a story of four friends from Charlestown who are bank robbers.  Affleck is Doug MacRay, the lead in the movie, and the leader of the robbers.  His best friend, James Coughlin, an ex-con with a violent streak is played by Jeremy Renner.  The first heist we see, Coughlin freaks out when the silent alarm is tripped and takes bank manager, Claire, played by Rebecca Hall, hostage for leverage in case they get cornered.  After they escape, she is released, but Coughlin is paranoid that she saw something so Doug decides to tail her to find out if she knows anything.  He decides to approach her and ends up falling in love with her. This prompts him to want to leave town, but he can only do this after doing one last job for the florist, and telling his ex-girlfriend, played by Blake Lively, that he is leaving without her.  In the midst of all this, the FBI headed by John Hamm, suspects them as robbers and are actively building a case against the four.

The town follows the generic criminal falls in love with a innocent and changes his life plot, but the actors bring a new dimension to this old plot.  Ben Affleck is the weakest acting wise, but he makes up with his directing.  There is a lot of attention to detail, for instance, when one character takes his last sip of soda before walking into a situation that will lead to certain death.  The thing I never understand about these movies is why the main character doesn’t just leave?  I mean one gangster is much easier to evade than the FBI.  I guess that probably wouldn’t make for good drama.