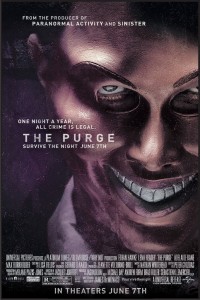 When I first heard about The Purge, I was very interested in the plot concept. I thought it seemed original and had the possibility to be a movie that actually had the nerve to speak on the social cliques and stereotypes that widely go unmentioned in our nation. Sadly, my hopes were dashed, as this film is nothing more than a cheap, uninspired, rip-off of Straw Dogs.

Director James DeMonaco gets the most out of his cast that includes Ethan Hawke, Lena Headey, Max Burkholder, Adelaide Kane, and Edwin Hodge. The problem with the film isn’t with the characters; it’s with the poor writing. The film comes in at a paltry 85 minutes. I’m sorry, but in the day in age where a movie ticket costs umpteen dollars, I expect at least 95-100 minutes in a movie.

The premise of The Purge is a good one, it just lacks the proper follow-through. We pick up in 2022, where the night of The Purge is upon us. In America, for one time per year, the government has allowed its citizens to hunt, kill, rape, steal; basically do anything they want. This was instituted as a way to keep crime down, and it has worked. It just happens to not work out so well for Hawke’s family in the film. Let it be known that Hawke’s family is very wealth, as he designs security systems, which all his neighborhood has. His family seems to be the envy of the entire neighborhood.

The first part of the film works, as the opening credits roll, we are shown video surveillance footage of brutal murders from Purge’s past. It is effective, realistic, and eerie. Then the film pretty much goes into the shitter. Hawke (James Sandin) drives through the neighborhood greeting neighbors and discussing the upcoming Purge that night. We are introduced to the rest of the Sandins’, wife, son and daughter. Mr. Sandin brags about his effective security systems, so you know his will not stand a chance against intruders.

After the Sandin’s son opens the gates for a stranger who is being chased by a group of Purgers, the movie loses control. We get family members running around the house searching for a random black guy that a group of upper-class, white teens want to kill because it is their right, as well as the boyfriend of the Sandin’s daughter sneaking into the house to kill Mr. Sandin because he forbids his daughter to date an older boy. Things just get really screwed up.

I guess my biggest problem with the movie was two things. First, if killing is perfectly legal and supported, why do the killers wear stupid looking masks? I was thinking that the whole time during the movie. And secondly, movies should be enjoyable. I love disturbing films like Straw Dogs, Devil’s Rejects, Natural Born Killers, etc. There is something to be said about a well-made movie that leaves me disturbed. The Purge does not do that. It just left me pissed off that a great, original, and realistic storyline was ruined on lame directing and writing. It also left me thinking that maybe I have seen something worse than G.I. Joe: Retaliation this year.