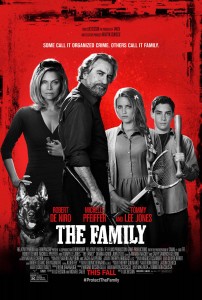 A cast list can be pretty indicative of the quality of the film. One might think a film that gives top billing to people like Robert De Niro, Michelle Pfeiffer, and Tommy Lee Jones would be an instant classic. Add in French super producer, director, and writer Luc Besson, and high hopes are likely to be shared by all.  It’s a shame when something like The Family, which was lined up to knock everyone off their feet, fails so dismally.

Nobody likes a snitch. Despite his long days of service to the mafia, Giovanni Manzoni (Robert De Niro) is now on the run with the aid of the US Witness Protection in exchange for giving testimony against many of his former friends. Manzoni and family can’t seem to fit in anywhere, which might be attributed to how they gravitate to violence and crime.  When the family is relocated to a small French village in Normandy, they continue along their path. For the youngest Manzoni, Warren (John D’Leo), school isn’t so much a learning experience, but a network he can exploit for his own purposes. The daughter, Belle (Dianna Agron), displays flashes of well concocted violence when pushed.  While the mother, Maggie (Michelle Pfeiffer), takes to homemade bombs when slights are made against her. Nothing tops the psychosis of Giovanni, now posing as Fred Blake, who has a warped morals system that allows him to inflict punishment at the drop of a hat when he perceives he has been wronged. All of these shows of violence are merely plot devices to explain a harried third act that involves Giovanni’s past violently crashing into his present.

Tonally this film is completely out of wack. The film is disorienting due to its identity issues, and becomes very plodding because of it. It appears director Luc Besson was going for a black comedy that drew inspiration from famous mob films, but failed to understand the depth of his inspiration. Besson even makes the odd choice to have De Niro’s character talk about a film study of Goodfellas. It is one of the many peculiar choices that make up The Family. The social commentary seems to be making fun of the way Americans are treated by French society, all while showing some of the worst caricatures of Americans in film history. There are very few redeeming qualities about the family in this film, and the ones you can find aren’t enough to save the film.

The acting isn’t the problem in the film. De Niro acts pretty much how you would expect him to, after numerous mob roles you’d be right to expect him to slip easily into the role. Pfeiffer is no stranger to her role either, and works with the material she is given. Relative newcomer John D’Leo is the bright spot in the film, and one of the few characters whose emotions don’t feel forced. In contrast Dianna Agron continues to be bland as an actress, despite how beautiful she appears on the big screen. Tommy Lee Jones continues his tired and weary lawman act he’s also perfected over the years. The performances from the cast aren’t incredible, but the certainly are above the quality of the script and direction.

It’s been a while since Besson has directed a live action feature aimed at American audiences, and it shows. Besson has always been a director who has a bit of flair, but misses the mark completely here. He bends to conventional tropes of mob films and tries to place them in a new interesting setting. Unfortunately, the setting he chose is bland, and becomes off putting to the rest of the film. Its hard to believe he tried to play the film as an action comedy, but instead produced one of the least remarkable black comedies in years.