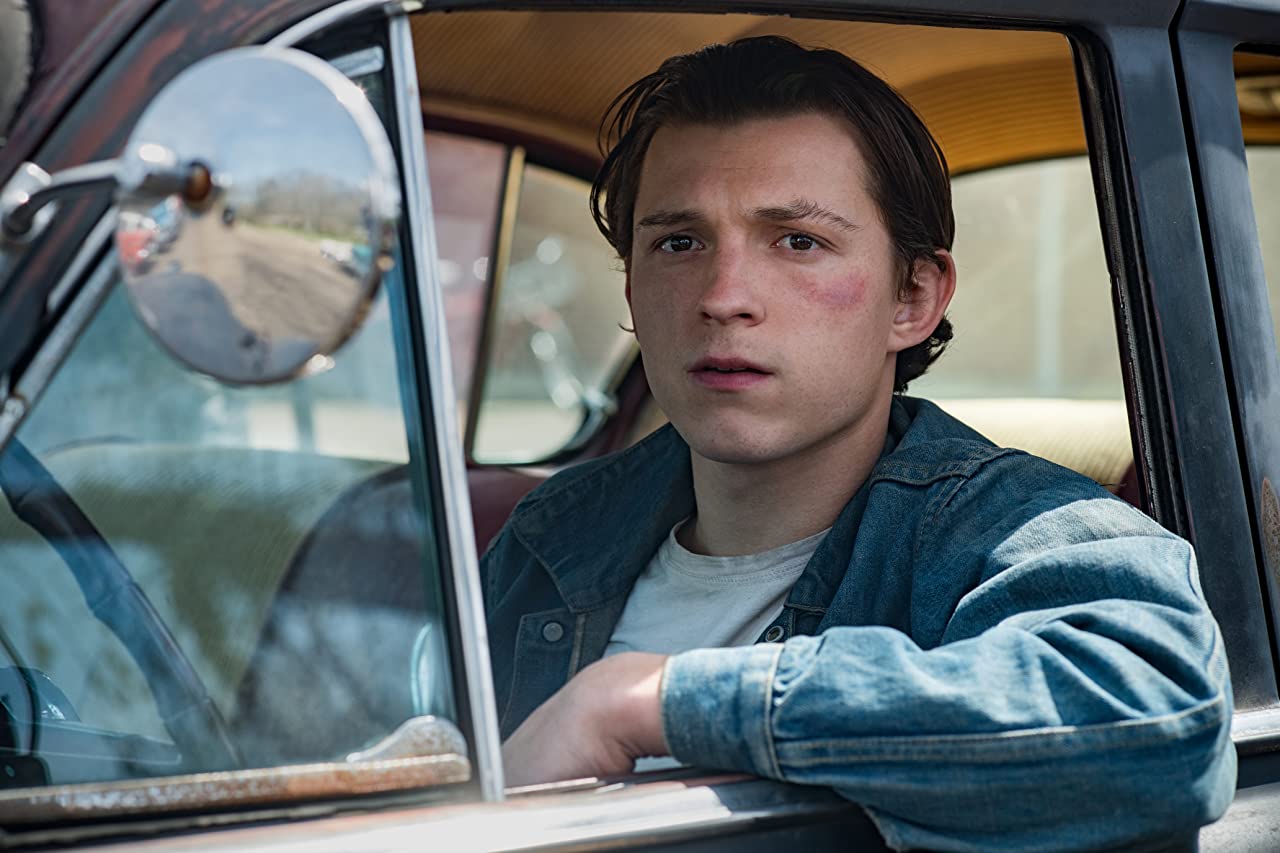 The latest film to hit Netflix is the star-studded adaptation of Donald Ray Pollock’s 2011 novel, The Devil All the Time.

Directed by Antonio Campos, featuring a screenplay by the director and his older brother Paulo, the film follows several characters in the south between World War II and Vietnam. There is a time jump during the film, where we examine the sins of fathers and how they affect their children.

Listen to our interview with Antonio Campos about the film.

Religion is a theme that runs throughout the story, but it isn’t as much a commentary on religion as it is a study of how religion can be abused in the wrong hands.

The film opens in 1957, where Willard Russell (Bill Skarsgård) prays with his son. The narrator, who is also the book’s author (Pollack), reads a line straight out of the book – “…it seemed that his father had fought the Devil all the time.” Hence the title of both.

The story flashes back twelve years earlier during the war, where we see a gruesome scene that causes Willard to begin his struggle with religion. On his way home to Coal Creek, West Virginia he stops in a diner where he meets his future wife Charlotte (Haley Bennett). It just so happens to be the same time and place that another customer, Carl (Jason Clarke), is meeting his future wife as well – a waitress named Sandy (Riley Keough) who just started the job. Little do they know how their stories would all eventually intersect.

Willard’s mother Emma (Kristin Griffith) wants him to marry Helen Hatton (Mia Wasikowska), a girl from her church whose family was killed in a fire. She promised God she would arrange the marriage in exchange for bringing him home safely from the war. However, Willard was already making plans to go back to Ohio and visit Charlotte at the diner. So Helen eventually winds up marrying a traveling preacher she meets at church, Roy Laferty (Harry Melling).

Willard and Charlotte have a son named Arvin, while Helen and Roy have a daughter named Lenora. Through several unfortunate events, both children end up losing their parents. Arvin and Lenora grow up together as siblings, raised by Grandma Emma and her son Earskell (David Atkinson).

Teenage Arvin and Lenora are played by Tom Holland and Eliza Scanlen, who are both fantastic in the film. Holland has matured over the past several years, and it truly shows in this role – which is much different than that of his iconic portrayal of Spider-Man in the MCU. Arvin is damaged, struggling to grasp the loss of his family, and has his own troubled past with religion. You can read it on Holland’s face as he gives one of the best performances of his career. Meanwhile, Scanlen plays the quiet and reserved Lenora terrifically. The character is a devout Christian who wants nothing more than to please the Lord. Arvin watches over her, and defends her when she is picked on by kids at school. We see that he is willing to do whatever it takes to protect his adopted sister.

Trouble comes to town in the form of a new pastor, Preston Teagardin (Robert Pattinson). It is clear from his introduction that he is going to cause problems for the family, which eventually manifest themselves in an inappropriate relationship with Lenora. Both Arvin and Lenora are forced to question their faith, as they are faced with difficult decisions about how to handle the cards they have been dealt.

Pattinson is terrific in a role that calls for him to be hypocritical, disturbing, and downright disgusting in his actions. He’s a great actor who has shown up in a lot of surprising roles over the years, but this may be the most disturbing due to how believable this character existing is. He is the opposite of charming in this repugnant role, which is exactly what’s called for.

Sebastian Stan plays Sheriff Lee Bodecker, a corrupt lawman who is also the brother of Sandy. His character takes some interesting twists and turns, especially when it comes to how his story connects with the others. Much like Pattinson, the actor has been challenging himself with a wide variety of roles over the past few years and he’s a name I’m always excited to see show up in a new film.

It’s clear to see that there are a lot of characters in the film. Yet the Campos brothers have found a way to introduce them organically and without much confusion. Each of their stories is clearly told, whether individually or intersecting with one another.

Cinematographer Lol Crawley excels at capturing the dinginess of the backwoods towns, mirroring the internal struggle of the characters and their morality. Stunning photography helps make this gothic crime drama captivating to watch unfold.

Campos is known to be drawn to troubled characters and subject matter that isn’t always easy to digest. The Devil All the Time goes to some very uncomfortable places, where the characters tend to make more bad decisions than good. There is a focus on the traits you inherit versus the choices you make – and how religion and free will have an impact. The film is a fascinating character study, with excellent performances that make it hard to look away from all the ugliness.