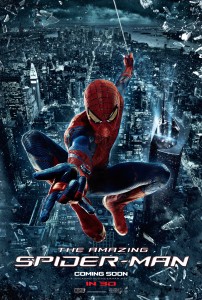 It might seem strange to most people that there is a reboot of the Spider-Man series that launched just 10 years ago. It may seem even more strange due to the fact that the series of films is one of the most successful trilogies of all time. Aren’t reboots usually saved for source material that bombed the first time? Not in this case. Sony, looking to hold on the rights of the spectacular webbed hero, had to make a movie or lose the rights to Disney/Marvel.  So, what do you do? You hire the director (ironically named Marc Webb) who has just found success with an indie romantic comedy, and give him the reins to a multi-million dollar franchise. Wait, back up, you do what? Maybe we are getting a bit ahead of ourselves…

The Amazing Spider-Man follows the well known origin story of Peter Parker (Andrew Garfield), high school nerd, who is bitten by a radioactive spider, and granted incredible super powers.  Much of the story follows a similar path of Sam Raimi’s Spider-Man. However, this time we are given a bit more backstory about Peter’s parents, and a shadowy plot that involves Oscorp. The Amazing Spider-Man also keeps us grounded in Parker’s high school era, and changes the love interest back to the comic’s Gwen Stacy (Emma Stone). It also introduces a new villain in the form of Dr. Curtis Conners, a one-armed expert in cross-species genetics, who becomes his own lab rat, and subsequently “The Lizard”.

It’s quite hard to retell the same story twice in a decade, and convince your audience that you are telling something completely different. The Amazing Spider-man tries at every turn, even changing the famous “With great power, comes great responsibility” into a less quotable line that amounts to the same thing. Some of the changes are quite nice though, Flash Thompson is still a jerk, but doesn’t seem to stay that way always. Peter shows a lot more ingenuity by creating his own web shooters, something many geeks will be happy over.

However, much of the story is still stuck in plodding exposition that doesn’t amount to anything quickly. Much of the conflict in the plot feels very forced, and incredibly cheesy at times. When shown a device that is capable of spreading toxin through the air, Webb might as well have put up arrows saying, “The bad guy is totally going to use this!” This mixed along with a third act full of deus ex machina and cheesy American iconography, make the story somewhat of a mess.

That isn’t to say The Amazing Spider-Man isn’t without its bright spots. What the series does improve on is the main cast, Garfield blows Tobey Maguire’s Spider-Man out of the water. Where Maguire’s Parker was bland and a bit timid, Garfield’s Parker is more inline with the original source material, and makes the web-head a wisecracking underdog. Emma Stone shows great chemistry with Garfield, and offers a bit more backbone than was ever given to Kirsten Dunst’s Mary Jane Watson. Stone continues to prove she is the real deal, with amazing amounts of on screen charisma and fantastic acting chops.

Visuals are a step up from the Raimi Spider-Man series as well. Raimi had a tendency to fall back on his B-movie horror skillset, which was fun at the time, but didn’t seem to fit your friendly neighborhood Spider-Man. Webb gives the series better photography, and a Spider-man with improved gymnastic capabilities.  Every action sequence is exhilarating, and it makes you wish they had included a little less exposition, and a bit more action.

The first act is certainly the hardest, and the great news is that the series have a great platform to continue from. The only complaint is that the potential for much higher levels were there, if it weren’t for a bit of sloppy storytelling. This is great superhero filler to tide you over until The Dark Knight Rises hits theaters later this month.