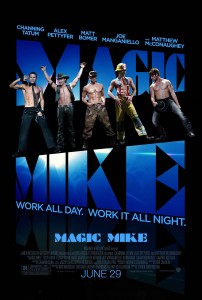 Magic Mike might go down as the biggest “head fake” in the history of cinema. Watching the trailer, one is led to believe that the film will amount to nothing more than 90-minutes of Chippendale wannabes shaking their junk. In reality, it’s only about 30-minutes. The rest of the film turns out to be a funny, gritty tale which (at the risk of losing a “Man Card” that I never really had) is rather enjoyable.

The story follows Channing Tatum as our titular (dick-ular?) hero. Mike is a man of many talents – construction worker, club promoter, furniture designer and all around entrepreneur. However, try as he might, the lion’s share of his income is derived from, um…dancing? Sure, let’s call it “dancing.” He’s smart enough to want more; he just doesn’t know how to get it. When Mike meets Adam (Alex Pettyfer), a rudderless college dropout, he decides to help him find direction through the world of “exotic, ladies’ entertainment.” An apostrophe and comma have never been more important.

The movie’s marketing machine has gotten much mileage out of Tatum’s early days as exactly this sort of entertainer and his past serves him well here. Tatum delivers what is probably the most comfortable on-screen performance of his career. Gone is his meathead stoicism; in its place is a laid-back, affable charmer who is likable for more than his looks or, perhaps, in spite of them.

Directed by Steven Soderbergh (Ocean’s Eleven, Erin Brockovich), the film maintains a naturalistic tone whenever it leaves the club. Eschewing the use of a score (music is for stripping) he instead relies on ambient sound which helps keep the film grounded. The dialog is delivered in a conversational manner complete with “ums,” “uhs” and stammers. And it’s this technique that prevents the film from devolving into camp as it begins to focus on the seedier side of Tampa’s nightlife.

The film, like its namesake, aspires to be more than just stripping and surprisingly it succeeds. Soderbergh takes us into a world rarely explored on film and tells an interesting story in the process. Its story arc is perhaps a bit too close that of Saturday Night Fever (a lost man-child coasting on good looks and dance moves until he meets a woman who shows him life could be something more). But ultimately, Magic Mike is as much about stripping as Saturday Night Fever was about disco dancing.

But don’t worry ladies (and some fellas); they don’t scrimp on the rump-shaking. They just figured out a way to pack a good movie into all the downtime.