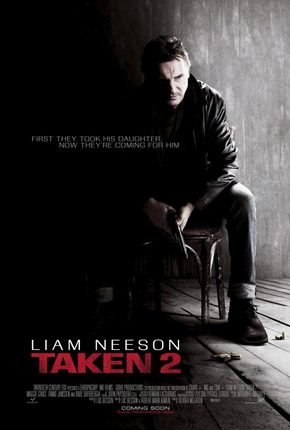 Back in 2008, a small film called Taken took theaters by surprise, revitalizing Liam Neeson’s career. Although he’d had parts in several bigger movies (The Phantom Menace, The Dark Knight, etc.), he really hadn’t had a tremendous starring role since his portrayals of Oskar Schindler and Michael Collins. Despite mediocre critical review, audiences loved Taken and Neeson re-emerged as a leading man.

Since the original made $226.8 million (on a $26 million budget), it was pretty much a foregone conclusion there’d be a sequel. I loved the first, but I was a bit wary; where else was there to go with the plot? I didn’t have my hopes set too high for anything other than a remake of the original, and I think it’s safe to say that in that aspect, I wasn’t disappointed.

A year after the events in the first film, Bryan Mills (Neeson) is doing what he can to be a normal dad. His daughter, Kim (Maggie Grace), has a new boyfriend and is hoping to get her driver’s license. After Bryan sees his ex-wife (Famke Janssen) arguing with her husband, she divulges they are separating and he’s canceled a trip the family had planned on taking. Mills is heading to Istanbul for three days to work, but invites them to join him afterwards for a family trip. Although they never respond to his invitation, they surprise him at the hotel he’s staying in.

All is not well in the Mills universe, though. Murad Hoxha (Rade Šerbedžija), the father of Marko, one of the protagonists of the first film, is seeking revenge. He orders his men to kidnap the entire family, but Kim manages to escape when she stays at the hotel instead of going to lunch with her parents, whom she’s hoping will rekindle their romance. Naturally, Murad makes the fatal mistake of not killing Mills immediately when he has the chance, otherwise this would have been about a 40-minute film.

It’s actually a pretty good thing few of the characters in the film bother with any logic, otherwise there wouldn’t be much of a movie in the first place. At several points in time, I found myself turning to Katie (my movie-mate) and saying, “Huh?!” Of course, if I weren’t willing to reasonably suspend disbelief, I wouldn’t like the majority of movies that came out, but this was a bit much.

I’d have been much more willing to let it go if the film was different or innovative, but it’s almost an identical clone to the first film, the only differences being the setting and the female family member taken hostage. Maggie Grace does play a larger role in the film, helping her father escape his captors; fortunately for Bryan, she’s apparently a track star, capable of running long distances and jumping across rooftops. Despite the fact that she hasn’t even passed her driver’s test, she’s capable of ably driving a manual through the streets of Istanbul. Neeson is, well, Liam Neeson. Mills isn’t a character who portrays many emotions other than determination and anger, and it’s a part Neeson plays well. Šerbedžija is unmemorable as the father seeking vengeance for the death of his son.

Taken 2 makes the mistake of playing it safe. It took what audiences loved about the first film and simply dropped it in a new setting; instead of expanding on it or trying something new, they’re simply counting on audiences wanting a second serving. If you’re hoping just to see Liam Neeson kicking butt, you’ll get more than your money’s worth. If you’re hoping for a little more, though, there are better options out there.