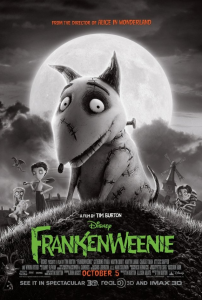 Losing a pet is a hard thing to go through – especially when you are a kid. It was that subject that Tim Burton tackled in his 1984 short film Frankenweenie, where a young boy named Victor Frankenstein brought his dog Sparky back to life after being hit by a car. Burton was fired by Disney for spending far too much money on a film that was too dark and scary for it’s intended audience. But a lot changes in 28 years, and since then Burton has worked on several projects for Disney. And against all odds, Disney hired him to remake the same film he was fired for and make it into a full length feature.

Victor Frankenstein (Charlie Tahan) is a quiet kid who loves science experiments, and more than anything – his dog Sparky. His parents Mr. and Mrs. Frankenstein (Martin Short and Catherine O’Hara) wish that he would spend more time outdoors with other kids and playing sports, but compromise with him by relating baseball to a science experiment. During his first baseball game, Victor hits a home run, launching the ball far from the field and into the street. Sparky, who was chained to the bleachers, brakes free and runs after the ball to return it to his master – but never makes it back. After witnessing his best friend being hit by a car, Victor takes a special interest in his science teacher Mr. Rzykruski’s (Martin Landau) lessons on lightning and electricity making a dead frog move. He gets the idea that with enough electricity from a coming storm, he can bring Sparky back to life.

Watching the 1984 Frankenweenie did two things for me. First, it allowed me to observe the similarities between it and the new film. And second, it reminded me of just how good of a story that original short film was. It is amazing how things have changed in just under three decades, and it is clear to see that the short film is mild by today’s standards. After watching the previews for the new movie countless times, my three year old watched it with me and absolutely loved it. And how many 1984 black and white short films can do that? The story is fun, heartwarming – and downright entertaining. Sure there are some tough subjects to tackle, like losing a pet, but overall it is pretty light. Fast forward to the modern version, and everything there is to love about the classic is there – and then some.

I love the fact that Burton and Disney decided to return to stop-motion animation in lieu of the modern computer generated 3D films. Sure, the Disney-Pixar stuff we have become accustomed to is great. But there is a definite nostalgia that comes along with having watched The Nightmare Before Christmas over and over as a child. And the way it looks has such a real, physical feeling to it – because that is what it is. I think the choice to leave the film in black and white like the original was fantastic, as it gives the story a certain tone that just wouldn’t come across the same in color. Even so, the animation is fluid and the clay models are fantastic down to every little detail. The 3D, while not completely necessary in my opinion, was never distracting and doesn’t pull gimmicks for cheap scares. There really isn’t much in the film that will scare young ones, which was a good decision.

Not only was it fun to revisit a story that had gone unseen for quite some time, but it was great to see it expanded past it’s original 30 minute run time. There was never a time in Frankenweenie, which was nearly three times the length of the 1984 version, where it seemed like Burton was just adding filler. The story is fun, touching, and extremely relatable for anyone who has experienced the loss of a pet. And the fact that my 3-year-old sat through the entire thing without taking his 3D glasses off once and loved it says a lot about how entertaining it is. If you are concerned about taking your young ones to see it, I wouldn’t worry too much about it. The film is fun for both kids and adults, and I think both will leave the theater equally happy.

Frankenweenie is an A